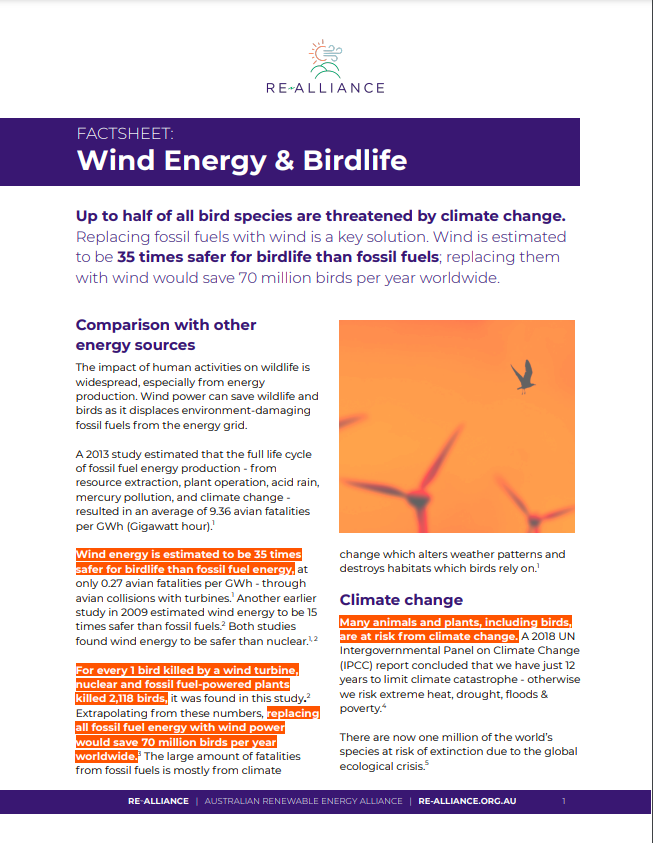 Comparison with other energy sources

The impact of human activities on wildlife is widespread, especially from energy production. Wind power can save wildlife and birds as it displaces environment-damaging fossil fuels from the energy grid.

For every 1 bird killed by a wind turbine, nuclear and fossil fuel-powered plants killed 2,118 birds, it was found in this study. Extrapolating from these numbers, replacing all fossil fuel energy with wind power would save 70 million birds per year worldwide. The large amount of fatalities from fossil fuels is mostly from climate change which alters weather patterns and destroys habitats which birds rely on.

Many animals and plants, including birds, are at risk from climate change. A 2018 UN Intergovernmental Panel on Climate Change (IPCC) report concluded that we have just 12 years to limit climate catastrophe - otherwise we risk extreme heat, drought, floods & poverty.

There are now one million of the world’s species at risk of extinction due to the global ecological crisis.

A 2013 study in the UK found that up to half of all birds are threatened by climate change.  “Species were classed as highly vulnerable if their local climate is changing rapidly, they are sensitive to these changes, and have little ability to adapt or relocate.” The results placed 24 to 50 per cent of species as highly vulnerable to climate change.

These alarming studies show the urgent need to shift our energy reliance from fossil fuels which damage our climate and harm birdlife, to low-carbon alternatives like wind energy.

Other impacts on bird populations

Fossil fuels, cars, cats and even windows prove to be of far more concern for bird populations. Below is a broad set of data from America, where cats and windows completely dwarf the impact of wind turbines. For everyone 1 avian death from wind turbines, cats kill 6,600. 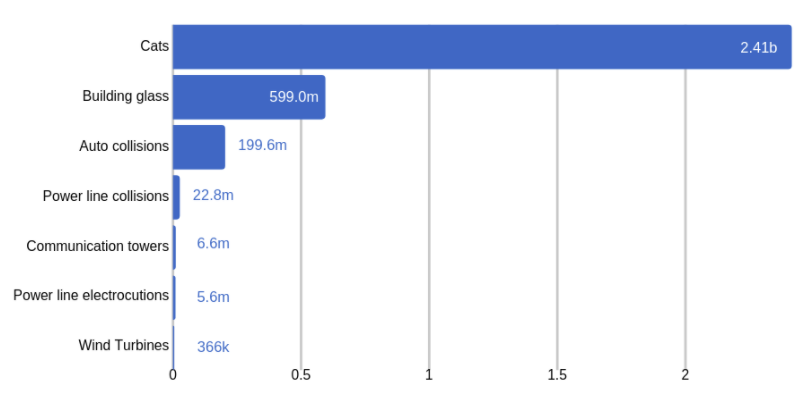 Similar to the American figures, fatalities by cats are the largest problem for bird populations. In Australia cats kill 316 million birds a year - 61 million of those are killed by pet cats.

Bird conservation groups around the world recognise the pressing threat of climate change to birds, and the need to pursue renewable energy alternatives like wind energy.

The UK’s Royal Society for the Protection of Birds (RSPB) has recognised the impact of climate change on birds. They have built a wind turbine at their headquarters and acknowledge the significant role wind power has to play in the fight against climate change.

In Australia, Birdlife Australia has a similar policy and has committed to zero emissions. All of these groups acknowledge the need to assess any significant risk to birds and wildlife in the placement of wind farms.

In Australia there are stringent processes to address and mitigate risks to birds & bats, mandated by multiple pieces of legislation and several government bodies. Many wind turbine projects take several years to complete the gamut of approval processes.

At a state level there is the:

At a federal level, projects must pass the:

Up to half of all bird species are threatened by climate change. Replacing fossil fuels with wind is a key solution. Wind is estimated to be 35 times safer for birdlife than fossil fuels; replacing them with wind would save 70 million birds per year worldwide.

Planning approval is subject to the number and species of birds/bats at risk. Once operating, wind energy companies must demonstrate that their predictive models demonstrate the real impact, and continue managing and monitoring the impact on birds and bats.

For a wind project, before a shovel can hit the ground, companies need a bird and bat management plan approved by the planning minister. This might contain conditions such as a threshold of what is an acceptable number of bird or bat deaths. Flora and fauna surveys conducted before and after construction independently monitor any impacts on birds and bats.

This process works effectively to protect important populations of birds and bats. For example, the Yaloak south wind farm in Victoria was forced to change their original plans and build fewer wind turbines to reduce their impact on Wedge Tailed Eagles.

There are many ways to improve safety for birds & bats when building wind turbines, but the main decider is where wind turbines are built, and ensuring that they are outside of important migratory routes and flight paths of birds.

Outside of better siting, different companies are working on interesting technological solutions. Birds of prey (raptors) and bats are low reproductive species, so finding ways to protect them from wind turbines is important.

Research is also being done into changing the colour of turbines and designing new turbine shapes. Earlier designs used to attract roosting birds to roost in their structures, but newer designs discourage this dangerous roosting.

Some wind companies have been using ultrasonic acoustics - which emits high-frequency sounds in-audible to humans, but confusing enough for bats’ echolocation to the point they avoid the area entirely.

[5] One million species at risk of extinction, UN report warns, and we are mostly to blame, ABC, 7 May 2019

[10] For the birds (and the bats): 8 ways wind power companies are trying to prevent deadly collisions, Grist, 3 Jan 20