Transmission lines are essential to get Australia to 100% renewables – they will connect us to cleaner, cheaper and more reliable power produced by wind and solar farms.

We need to build lots of new transmission lines over the next decade in our switch to renewable energy: around 10,000km, according to the Australian Energy Market Operator’s (AEMO) energy system roadmap, the 2022 Integrated System Plan (ISP). 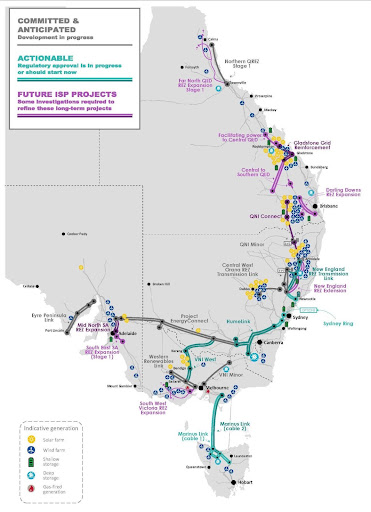 Some of these lines will be in regional communities who have not previously hosted large energy infrastructure. We are already seeing local concerns emerge as a result of this, with some communities opposing lines in their region. These concerns are understandable: developers and governments have often very poorly communicated and consulted with communities.

Local landholders must be supported to participate in the transmission planning process earlier as key stakeholders and paid fairly for hosting towers on their land.

On top of that, our national process for planning transmission lines is outdated and not fit for the task of upgrading our grid, which is also contributing significantly to delay.

There’s no doubt that building the transmission lines we need, in the time we need to avoid the worst impacts of climate change, will be an immense challenge.

But what will be the cost if this buildout is delayed?

Nexa Advisory recently engaged Endgame Economics to partly answer this question. They produced modelling that gives insight into the likely impact on our electricity bills caused by delays to the key transmission lines prescribed by AEMO’s plan.

The modelling shows us that prompt action to upgrade our grid will bring down the average price of electricity. If transmission lines are delayed, prices become higher and more volatile.

Other important findings include:

This slide from AEMO’s presentation of the ISP last week illustrates this well.

You can see that, generally, the earlier each transmission project becomes operational, the lower the wholesale energy costs are (as shown by the purple bars falling below zero). 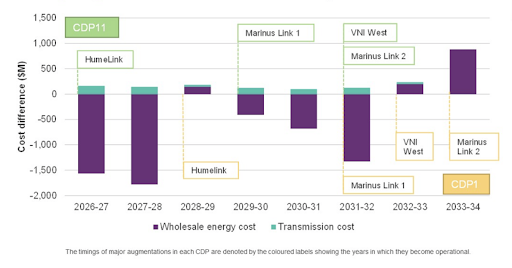 As part of their modelling, Nexa Advisory notes that the Federal Government’s $20billion ‘Rewiring the Nation’ policy package has significant potential to remove key roadblocks and to supercharge the transmission build.

To be most efficient, they recommend that the package:

RE-Alliance supports these recommendations, and will continue to lobby government to implement good energy policy.

We shouldn’t have to pay the price for delays in building transmission lines. A renewable energy future can benefit all Australians, if we do it right.