To get to a net-zero future, we need to build an immense amount of new renewable energy infrastructure, and quickly.

In particular, we need to build a lot of new transmission lines that will connect us to the renewable energy generators – around 10,000km in the next decade, according to the Australian Energy Market Operator’s energy system roadmap, the 2022 Integrated System Plan.

One of the key challenges will be to build these lines in ways that are acceptable to people who will live underneath and around them and this may involve additional costs.

As energy consumers are currently the ones who foot the bill, what are we able to and prepared to pay for it?

HumeLink is a new 500kV transmission line which will connect Wagga Wagga, Bannaby and Maragle. It will connect the pumped hydro project Snowy 2.0 to Sydney, Newcastle and Wollongong, where the power is most needed.

It is one of the state’s largest energy infrastructure projects, with about 360km of proposed new transmission lines, and new or upgraded infrastructure at three locations. 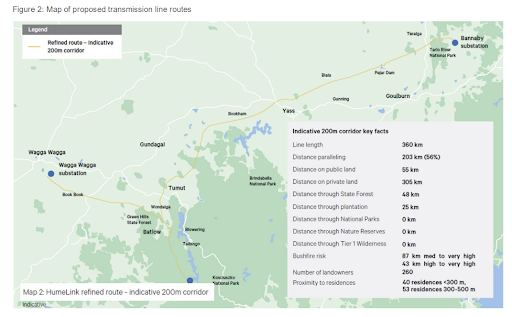 The project is designed to connect new wind and solar farms to the network, as well as the Snowy 2.0 pumped hydro project. It expects to create more than 1000 new construction jobs and generate benefits for local communities along the route.

In late 2021, following a request from the local community, Transgrid agreed to investigate options exploring the feasibility of building the HumeLink project via underground cable instead of overhead transmission lines. The community was able to appoint a qualified firm as an independent technical advisor to the report. Communities can see undergrounding as a preferable option as it reduces the visual impacts of the lines.

The report investigated a number of HVAC (High Voltage Alternating Current) or HVDC (High Voltage Direct Current) options, both above ground and underground. It is particularly expensive to put HVAC lines underground (the report estimated a cost of $17.1 billion), however using HVDC options would significantly reduce the undergrounding costs. The costs are still, however, significantly higher than for above-ground transmission lines and would bring a delay of 2-3 years in the delivery of the project.

The report has found that the cost of undergrounding the HumeLink transmission lines is estimated to be $11.5 billion (for Option 2A-1, HVDC lines), which is at least three times more than the entire project’s current cost of $3.3 billion. This option is expected to take 7 years to build, compared to 4-5 years for the overhead option.

Increased costs are driven by a range of factors, most obviously the need to dig the trenches. Other costs include labour, materials, plant and equipment, engineering and project management costs.

The report also notes that internationally there is high demand for equipment and few suppliers, which is leading to reduced competition on projects and less competitive pricing.

Response to the report

The Humelink Community Consultation Groups Steering Committee, formed by Transgrid and made up of local community members, responded to the report, and it’s fair to say they weren’t convinced. They “do not endorse it” and say the report is unbalanced, “as it favours an approach of focussing on the negative aspects of selecting underground high voltage cables over AC overhead lines”.

They list 11 concerns in their response, including that they think the costs of DC underground lines are overstated for a number of technical reasons. The Community Groups note that there are a number of underground options or hybrid underground / overhead options of suitable reliability rating that are between 2.9 and 3.5 times the estimated cost of the current AC overhead option. They conclude: “Hopefully the outcomes of this report will debunk the often-repeated myth that undergrounding is ten times the cost.”

So, while the Community Groups acknowledge a cost increase of around 3 times, they see it as a step forward on debunking claims that undergrounding could be as much as 10 times more expensive, and feel additional options were not adequately considered.

The Community Groups are calling for a full and comprehensive expert review of the HumeLink undergrounding study to address what they see as problem areas in the report.

However, the finding of such substantial additional costs means that an undergrounding option will not pass the current regulatory framework, the Regulatory Test for Transmission (RIT-T). Overseen by the Australian Energy Regulator, the RIT-T only approves what are deemed to be efficient costs, which in this case is the above-ground option, which has recently been approved for early works.

This investigation of the Humelink transmission line poses important questions for us in our renewable energy transformation. How can we balance community concerns and wishes with what it will cost us? It’s a challenging task – made only more challenging by the urgency with which we need to move to more reliable and sustainable energy sources.