International climate meetings often happen a long way from home, and it can be hard to see how they impact regional communities in Australia.

In short, international recognition of the need for clean energy is growing, and this reinforces that the development of new transmission and Renewable Energy Zones in Australia is part of a worldwide trend. Making sure we do it right for the communities involved is paramount.

Held in Egypt, COP27 was the first COP under our new federal government. "The Australian team was certainly in better form this year than in Glasgow [at COP26]. But improvement on the Morrison Govt doesn’t translate into climate leadership,” said Richie Merzian, director of the climate and energy program at The Australia Institute.

Here are some notable outcomes from COP27, and what they mean for Australia’s energy transformation and our communities.

The COP27 decision text recognises that “the unprecedented global energy crisis underlines the urgency to rapidly transform energy systems to be more secure, reliable, and resilient, by accelerating clean and just transitions to renewable energy during this critical decade of action.” 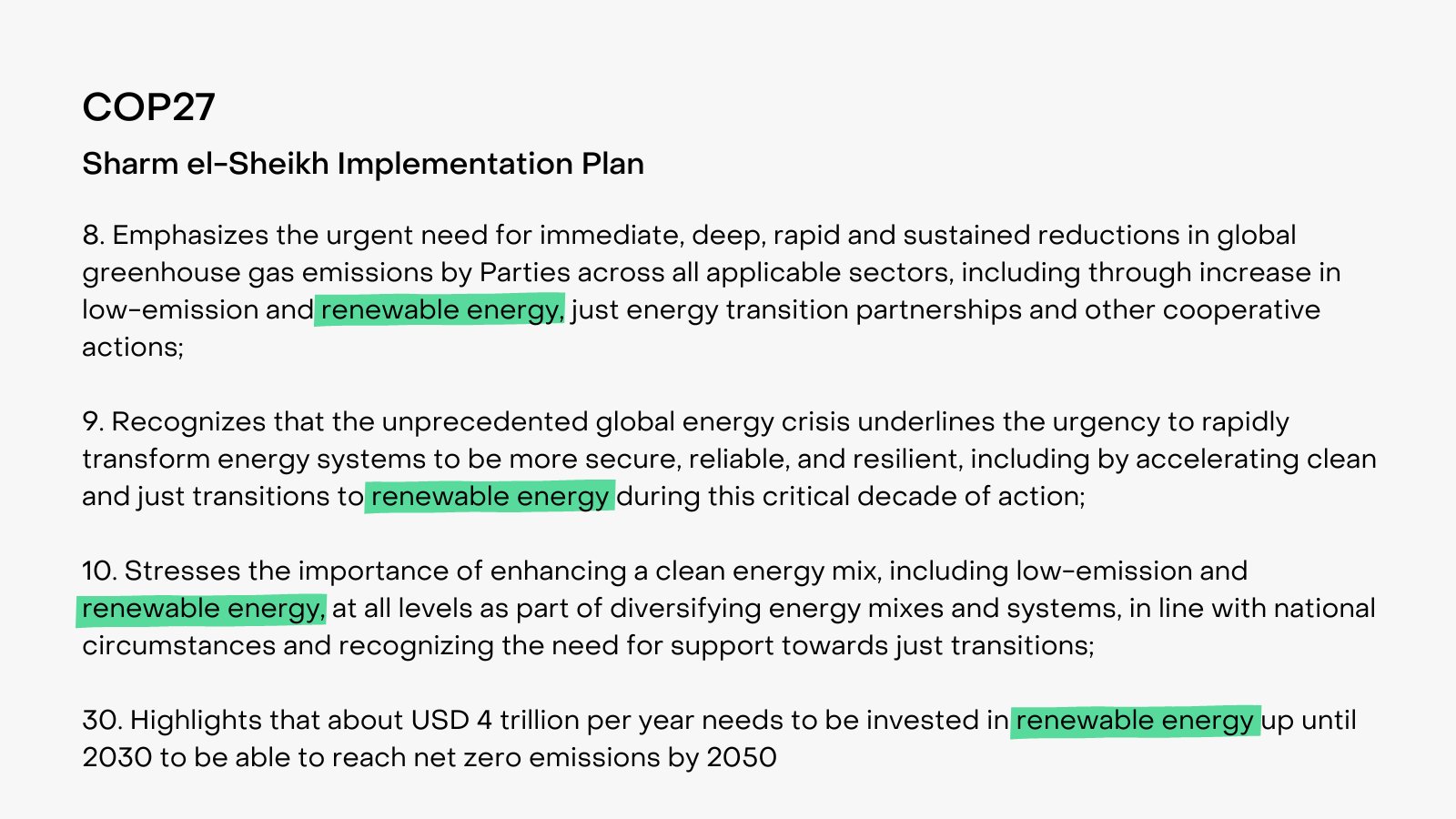 It’s worth noting that the text promotes “low-emission” energy in addition to renewables, which was added at the last minute in discussions. “Low-emission” energy has the potential to be interpreted as gas or fossil fuels with carbon capture and storage, so there is work to be done to ensure that these don’t pass as sustainable energy options.

No phase out of fossil fuels

Attempts at COP27 to get all countries to agree to phase out fossil fuels failed, with no such commitments mentioned in the conference’s final decision text. Countries have done little to strengthen their commitments to cut greenhouse gas emissions in the past year, and in fact, some countries are negotiating new fossil fuel deals, driven in part by the global energy crisis.

Fossil fuels are the main cause of climate change, and any expansion of them makes it much harder to keep global warming under 1.5°C: a level many scientists consider a dangerous threshold, but one which it now seems unlikely we will stay below.

During COP27, Indigenous activists globally called on governments to respect First Nations' land rights. Traditional Owners and Aboriginal sustainability experts have warned the Australian government against making the same "mistake” it did with fossil fuel mining: where coal and gas projects went ahead on Aboriginal land without their approval and without equal sharing of benefits.

Now is the "best opportunity for Australia to rethink its relationship with Aboriginal people", says Dr Heidi Norman, convener of the Indigenous Land and Justice Research Hub.

There were some commitments made on the world stage to achieving a just energy transition – and they’re good examples for Australia to look to.

Just Energy Transition Partnerships have been launched in South Africa and Indonesia, supported by the International Partners Group. These partnerships aim to accelerate the decarbonisation of the nations’ economies, underpinned by a “just” approach, which in South Africa, for instance, includes ensuring that those most directly affected by a transition from coal – workers and communities including women and girls – are not left behind. The Africa Just and Affordable Energy Transition Initiative (AJAETI) was also launched at COP27.

For thirty years, developing countries have been calling for compensation for the damage climate change inflicts on their communities. A win from COP27 was a breakthrough agreement on a new “loss and damage” fund for vulnerable countries hit hardest by climate disasters. “This is a down payment on investment in our futures, and in climate justice,” says climate change minister of Pakistan, Sherry Rehman. A transitional committee will look into what funding is needed and where the money should come from – a challenge that will be navigated at COP28.


We’re glad to see an increased acknowledgement of the need for clean energy, more of a spotlight on First Nations’ land rights and a just transition, and provisional support for communities to deal with climate impacts come out of COP27.

However, it is disappointing to watch the world continue supporting fossil fuels – the biggest contributor to global climate change. With a warming climate and worsening extreme weather events, we need a swift switch to renewables and away from fossil fuels to protect our communities from the worst impacts of climate change. Here in Australia, with ample sun and wind, we have a chance to be a leader in building a clean energy future that protects and benefits our communities – if we choose.