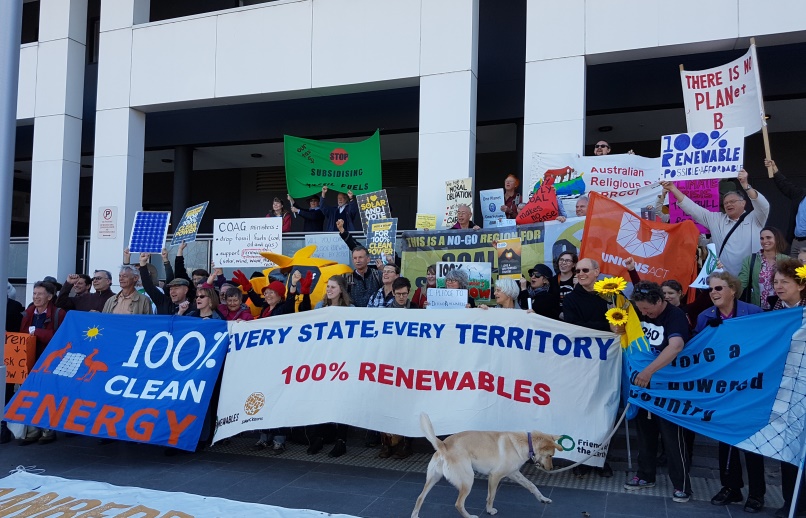 AWA member and wind farm neighbour Dimity Taylor joined an inspiring line up of speakers at a snap rally in front of the COAG meeting last Friday. Organised by Friends of the Earth, the rally brought together a wide range of groups, all calling on the nation's Energy ministers to aim high for an urgent transition to renewable energy.

Dimity hit a chord with her story about how wind power was delivering not just for the planet but for her community. It was noted by a few in the crowd that this is a different story than the one they were reading in the newspapers.

Other speakers included local solar installer, Benn Masters, who celebrated the fact that the ACT would be 100% renewable in just three years. He also talked up how the positive investment environment in the ACT had allowed his business to take on more staff and drive clean energy jobs.

While a couple of positive steps came out of the meeting, such as expediting a decision about a future interconnector between South Australia and New South Wales and some greater transparency around gas pricing to prevent gouging, the overall sense is that COAG is a long way from driving a clear agenda to transition towards 100% renewables.

AWA joined with a number of other renewables and environment groups to produce a joint briefing to the meeting. We called for the COAG ENergy Council to take the following key steps: 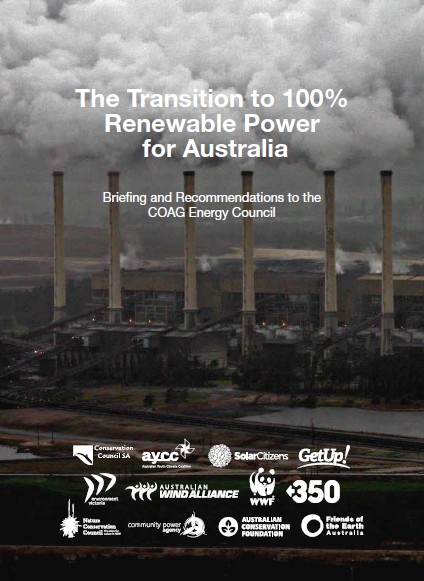 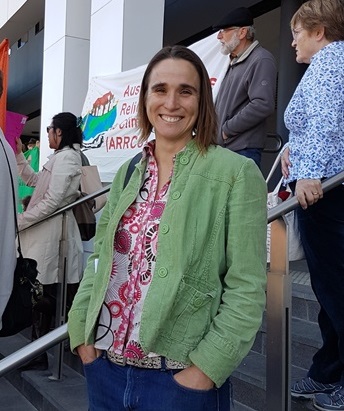 My name is Dimity and I live right in the middle of a whopping great wind farm. The Gullen Range Wind Farm, near Crookwell in NSW. And do you know what? I really love living there. I love having such beautiful, majestic structures all around our property, especially as the sun sets and they change from white to pink to purple to orange. I also love that I have such a great opportunity to demonstrate to my 3 young children how the electricity we use in our house can be generated in a way that doesn’t damage our environment and is helping our country to minimize the extent of climate change. This will be even more powerful when the wind farm builds a solar farm right next door, to make the most of the spare capacity in the transformer.

I am also grateful that my parents in law, like many others in our area, who are hosts to a wind turbine, are going to be able to hand on their farm to the next generation, partly because of the financial security that the wind farm affords them. There are other farmers who are now able to run their farm in a more sustainable manner that does not flog the land, especially in periods of ever more frequent droughts.

It is also important to me that these kind of benefits are beginning to be spread even more widely throughout wind farm communities as community benefit sharing schemes start to become the norm. This means that the neighbors of wind farms are now being paid, not just the hosts of the turbines.

As a close neighbor to a wind farm, I am afforded some fantastic benefits. My family, like nearly every other household within 5km of the wind farm, will soon have solar panels installed on our roofs, curtesy of the wind farm. This will not only be good for our electricity bill and carbon footprint, but is going to give a terrific boost to the amount of employment local solar installation companies can offer. There have also been thousands of trees planted around the district. These have been largely intended to shield the view of the turbines, but will also have a fantastic effect on soils, pastures, bird life, and carbon capture amongst other things. This has seen a great increase in the number of employees a local fencing and tree planting company has been able to have on.

Similarly, the local earth moving and transport companies have had a fantastic boost in their work load, and hence the number of people they are employing, especially during the construction phase of the wind farm. Thanks to the wind farm, our community now has its very own community hall. This is a place where our community can get together for such events as Christmas drinks, movie nights, craft weekends and community meetings.

Being a part of a family that has Wallaby blood in it, there is also a good chance that in the future my children will benefit from the support that the Gullen Range Wind Farm provides to the local footy club and various other sporting teams.

What I am trying to say with all this is that renewable energy projects, apart from being essential for mitigating the impact of climate change, are valuable resources that help communities grow and thrive. Renewable energy projects, like wind farms, inject a lot of money and jobs into rural communities. They help financially mitigate against the impacts of climate change that going to be, and already are, being felt very hard in rural areas. There is a lot of damaging misinformation being spread about these projects, which needs to be seen for what it is, which is propaganda from a fossil fuel industry that is feeling the pinch. For the sake of our global climate, for the sake of our national economy and for the sake of our rural communities, we need to give renewable energy projects the political backing they need to allow us all to reap the benefits they offer.