Surely they're not fair dinkum? 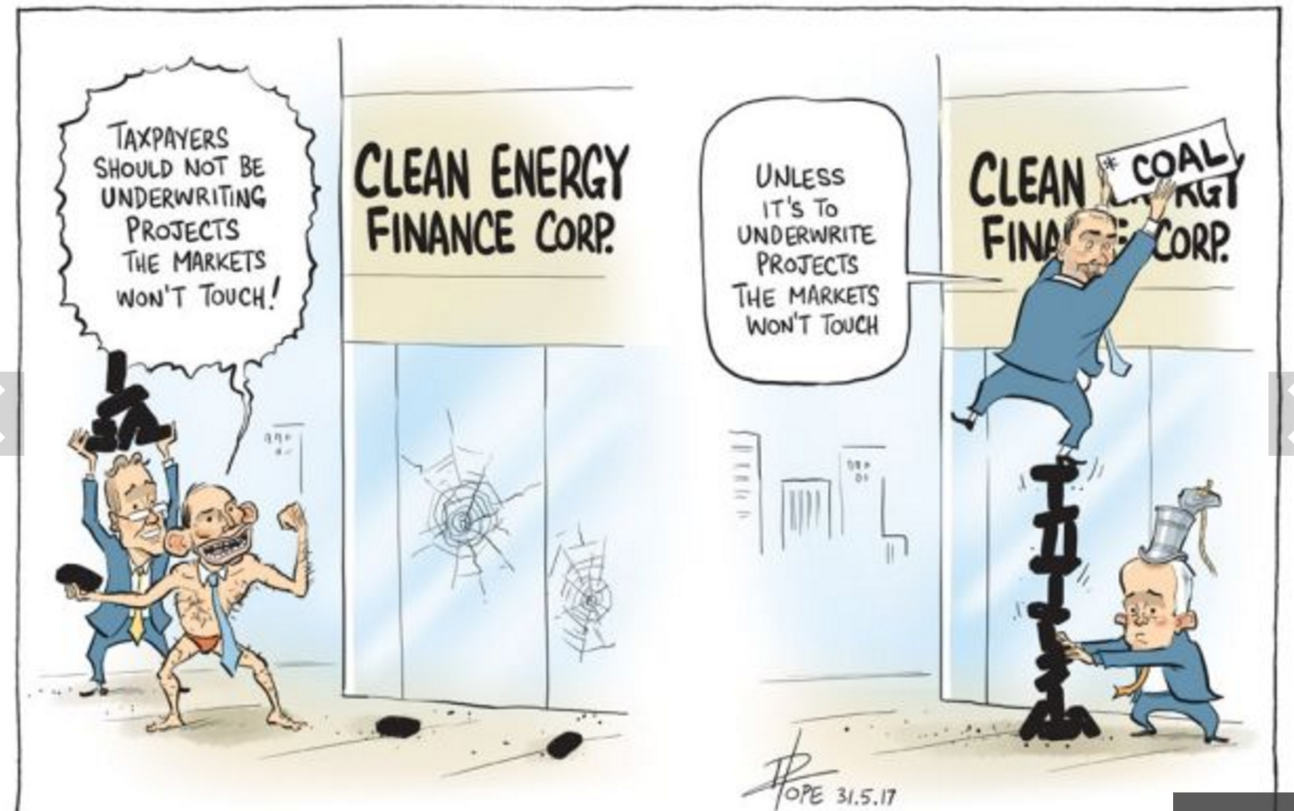 The biggest question facing Australia’s households and businesses right now is how to stop spiralling power bills and how to make sure we continue to have reliable power as we move towards a zero carbon grid.

If the Turnbull government’s push to get the Clean Energy Finance Corporation to fund Carbon Capture and Storage addressed either of these issues you might think they were fair dinkum.

The fact it does neither, however, is a pointer to the fact that this manoeuvre is more about political posturing than anything else. The cheapest new power plants we can build are wind farms and solar farms. If the government wants to stop price hikes it needs to set policy direction that continues the current boom in wind and solar construction and get cracking on the technologies to balance variable supply to user demand. This is what’s needed to keep prices down.

Instead, the government is pretending that carbon capture and storage (CCS) is a genuine prospect to cut emissions in the power sector. In fact, despite hundreds of millions of dollars of government funding over many years, it remains prohibitively expensive. And with only two commercial plants in operation in the world, neither of which has achieved its targets, it has failed to demonstrate it even works. CCS will play no part in reducing Australian power sector emissions in the next decade and it’s likely it never will.

One interesting takeout from the move however, is that in an oblique way it may actually suggest that the Coalition is shaping up to introduce some kind of carbon price. This is the interesting analysis of ex-CEO of the Clean Energy Finance Corporation, Oliver Yates. As the guy who was founding CEO of the organisation, he knows a thing or two about this and he laid out his thinking in an interview on ABC radio.

He's quite clear that CCS isn't going to applied to the power sector. "It doesn't make economic sense today to build another coal-fired power station and then capture its emissions.... because renewables are so cheap," he said.

"In Australia you don't need any additional baseload power. The cheapest form of power is coming from renewables. That is variable power, as we hear. It's being backed up with batteries. But the last thing you need is to have a great big clunker sitting there that operates all the time, which is what a traditional power station is."

However, CCS is also used by industry to capture carbon from industrial processes such as cement and steel making. This is an area that the CEFC could step into if there were no other ways to cut carbon emissions from these processes and CCS was economic. But the key would be for industry to be able to derive revenue (or avoid being charged) from reducing their emissions. That, of course, would require that bogeyman, so maligned by the right-wind of the Coalition - a price on carbon.

"What drives the economics is a price on carbon. If the government is saying they want carbon capture and storage, it suggests to me they're setting themselves up to suggest there should be a price on carbon.  Because otherwise what do you capture it for?"

"The whole benefit here ... is to capture the carbon so you don't emit it, therefore you don't get hit with the cost of emitting the carbon. If there is no price on carbon then you don't have a revenue stream on which to actually base applying the process to."

"Why would you bother capturing it if it didn't cost to release it?"

And of course, if there was no revenue, the CEFC wouldn't be able to invest in it as they are bound by law to seek commercial returns.

So, was Josh Frydenberg actually buttering up his colleagues for what pretty much all of industry is begging the government to do - put a price on carbon?