The first announcements under the Albanese government’s Rewiring the Nation program were released on Wednesday and they are BIG!! So big, in fact, that Minister for Climate Change and Energy, Chris Bowen, claims it is “the biggest announcement of federal investment in energy since the original Snowy scheme in the 1940s.” 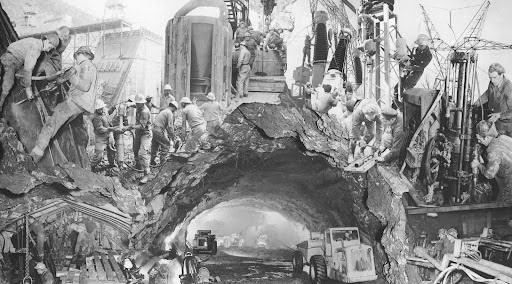 The revised cost (as at June 2022) for completion of both Marinus Link and the supporting transmission developments in North West Tasmania is AUS$3.8 billion.

The project is expected to create 1,400 jobs in Tasmania during peak construction, 1,400 jobs in Victoria, and deliver up to $4.5 billion in positive net market benefits above and beyond the cost to build Marinus Link and the supporting Tasmanian transmission developments. It will also provide improved access to Tasmania’s dispatchable capacity (including deep storages) and high quality renewable energy opportunities.

Marinus Link will cut at least 140 million tonnes of CO2 to 2050 – the equivalent of taking approximately one million cars off the road.

The Federal Government and the Tasmanian Government have signed a letter of intent that includes:

The government expects this low-cost financing from Rewiring the Nation to reduce the annual costs of Project Marinus to electricity customers by up to half.

Previous analysis has shown that Victoria and Tasmania only receive 34% of the gross customer benefits and that each National Electricity Market (NEM) region obtains a gross benefit from Project Marinus. Additionally, the reduction in wholesale energy price is fairly evenly spread across the NEM. 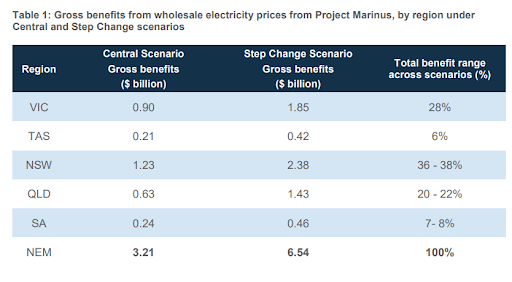 The Hon. Guy Barnett, Minister for Energy and Renewables, has commented, “Importantly, equitable cost sharing arrangements between the Commonwealth, Tasmania and Victoria have been agreed, meaning that Tasmanian consumers will only pay their fair share.

“This low cost financing from Rewiring the Nation will reduce the annual cost of Project Marinus for electricity customers by up to half.  By working together, we have been able to achieve a solution that will see, once Marinus Link is built, Tasmanian customers pay no more than 15% of estimated total project costs across both the Marinus Link and North-West Transmission Developments. This will ensure their electricity bills will be lower than they otherwise would be in a world without Marinus Link.”

The Australian Government and Victoria signed an agreement to jointly fund Victorian offshore wind projects, REZs, and the Victoria-New South Wales Interconnector (VNI West) KerangLink. The agreement between Victoria and the Commonwealth sets out:

VNI West is a proposed 500 kV interconnector from a proposed substation near Ballarat in Victoria to a new substation named Dinawan in southwest New South Wales It was previously proposed to be completed by July 2031.

VNI West is expected to unlock 4,000 MW of new power generation, supporting more than 2,000 direct jobs during construction and generating $1.8 billion in net market benefits – including for electricity users.

What’s missing from the funding announcements?

Three weeks ago, a group of 30 environment and climate organisations released recommendations to the Federal Government on the design of the Rewiring the Nation Policy.

The Federal Government’s Rewiring the Nation fund provides a great opportunity to build a grid designed for this century, in a way that benefits regional communities, electricity users and nature.

The Government recognises the need for transmission to ensure a rapid transition to an affordable, reliable and decarbonised electricity system. It has highlighted the opportunities for jobs and industry. But these can only be seized if projects genuinely deliver benefits to regional communities and protect our ecosystems.

The report made a range of recommendations: tying Rewiring the Nation funding to better social and environment processes and outcomes; tying funding to respect and recognition of the sovereignty of First Nations people and land through upholding the principles of self-determination and free, prior and informed consent; and improving planning, community engagement, compensation and benefit sharing arrangements for landholders and communities hosting transmission lines.

RE-Alliance welcomes the funding announcement, however we consider that ensuring community acceptance of these projects is at least as important as securing funding arrangements for them.

We see a greater role for the state in ensuring better social and environmental processes, and for Victoria this would fall on VicGrid.