Community at the Centre of Regional Renewable Energy Roadmaps 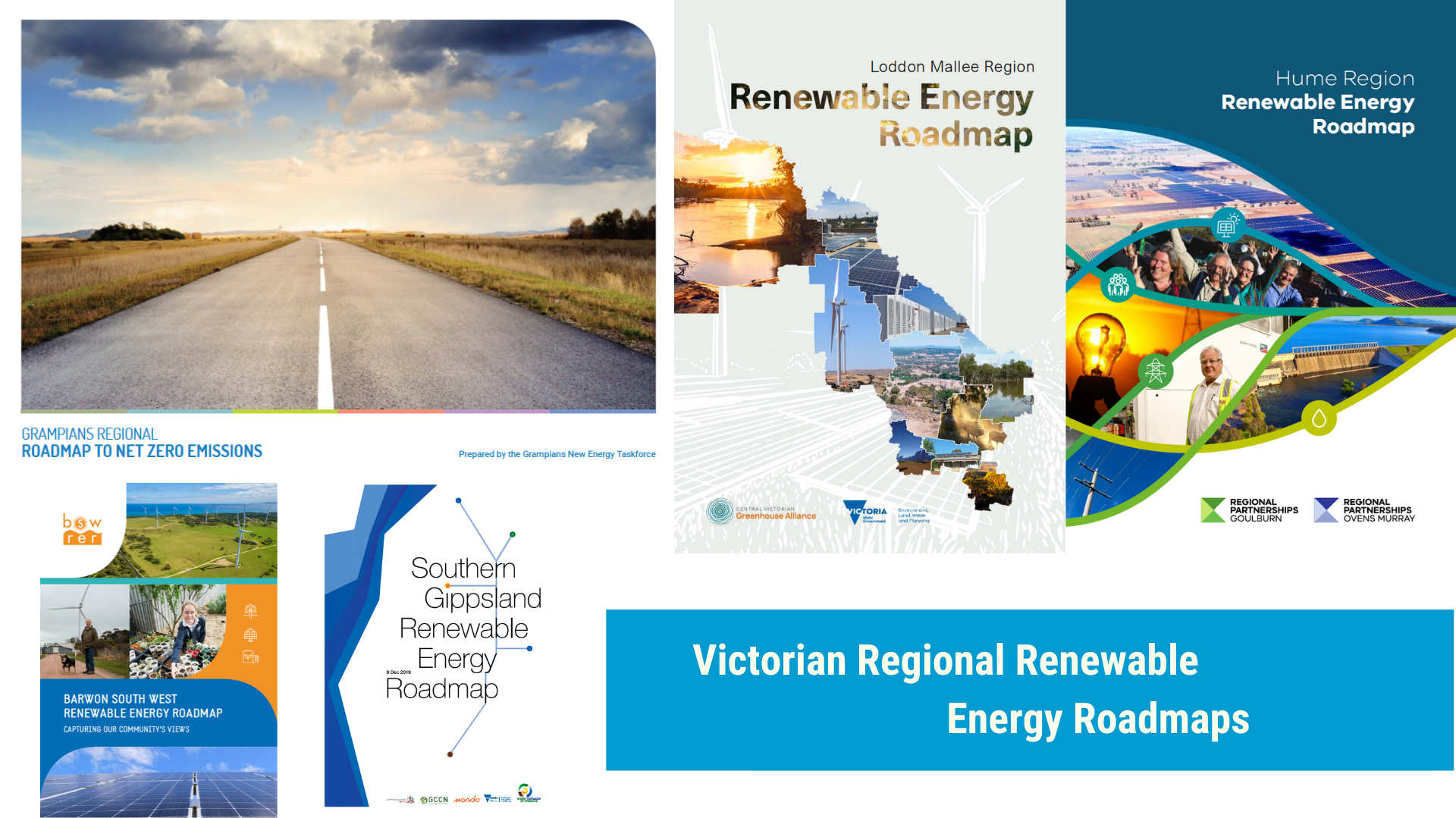 “...a majority of people would like to see the region powered by 100 per cent renewable energy by 2030.” - South Gippsland Renewable Energy Roadmap

“The region is already a national leader in renewable energy.” -  The Western Victoria Grampians Roadmap to Zero Emissions

“Over 150 locals aged between 11 and 18 had their say and indicated they are concerned about climate change and its impact on their future.” - Barwon South West Renewable Energy Roadmap

The Victorian government's Regional Renewable Energy Roadmaps  were released in the same week as the Federal Government’s “Technology Investment Roadmap”. The difference was that the Victorian roadmaps had a destination while the Federal one didn’t. The Regional Renewable Energy Roadmaps are actionable steps  to reduce emissions in line with time-bound, scientific targets  while the Federal Roadmap, coming seven years after the government took power,  pretends we have all the time in the world to achieve a goal that is neither clear nor taken seriously. If you’re going to have a roadmap, at least know where you’re going.

Our recent opinion piece explained how the Federal “Technology Investment Roadmap” claims to lower Australia’s emissions - but instead it is a push for highly-polluting gas fired generation, a dangerous distraction when we have no time to waste in tackling climate change.

Our economy needs a boost to recover from the COVD-19 pandemic economic shock and regional areas would benefit most from a clean energy recovery. The Victorian roadmaps move towards zero emissions in ways in which regional communities can benefit most.

The Regional Renewable Energy Roadmaps show that the regions are already in the middle of an energy transition that is driving jobs. For example there are 2,000 job years of employment from wind projects constructed or contracted since 2016 in the Barwon South West area alone. Modeling for the South Gippsland report shows that a 50MW wind farm would result in $31 million being captured in the Victorian economy. The roadmaps show that there is support for renewable energy but that communities need to be part of the energy transition.

The Barwon South West Roadmap shows that one quarter of Victoria's energy can be provided by the region, which has some of the best onshore wind resources in the state, and that communities can benefit most if the benefits are equitably shared. It indicates that manufacturing can be a big winner. manufacturing can grow through building on the examples of existing manufacturing in the region, such as the wind turbine assembly plant at the former Ford Factory in Geelong and wind tower manufacturer at Keppel Prince in Geelong, which has 360 staff. However, help is needed to achieve this such as requirements for local content and consistent policies to reduce emissions in the state such as the successful Victorian Renewable Energy Target.

The Gippsland Roadmap indicates new possibilities of benefit sharing. It says, “Opportunities exist to pool the financial benefits from multiple projects into a central fund to contribute to strategic, long-term regional impact." The Roadmap mentions that Aborignal organisations are looking at renewable energy projects, mid sized solar, which can create opportunities for training and employment. Heavy-industry hubs such as the Latrobe Valley would be one of the big winners, with existing know-how, skills, transmission infrastructure and some of the best onshore and offshore wind resources in Australia - which is why Australia’s first offshore wind farm, Start of the South, is being proposed in the region. One participant shared a vision of the region:

Wind will continue to grow across Southern Gippsland at various scales — from large commercial developments with community benefit sharing, to mid-scale cooperatively owned projects, to small and micro wind on individual farms and properties. Wind installations will take advantage of offshore and coastal wind resources, as well as the rolling hills and ridges across the region. Wind farms will be welcomed because quality community engagement has ensured the project is appropriate for its context and that the benefits are shared fairly with project hosts, neighbours and the local community.

This vision is shared in all the Roadmaps.

The Western Victoria Grampians Roadmap to Zero Emissions found that the “region is already a national leader in renewable energy.” Alex Ford for the Courier reported that it's a “plan to revolutionise the economy and save the planet...” The report states that the region can be net zero by 2044 but this would require leadership and cooperation from the community and all levels of government. A key recommendation from the Roadmap to Zero Emissions is that local, state and federal governments need to be active in upgrading the region's power grid. The report also flags opportunities for “the community to co-invest or co-own projects.”

The Loddon Mallee Roadmap shows that by 2025 the region can produce 500% of its energy needs. A headline fact reported in Bendigo Advertiser. The Hume Roadmap found that the Hume region has the most community energy groups in Australia. It also outlined the case of the Traditional Owners, the Taungurung Land and Waters Council (TLaWC) has organised a power purchase agreement which has “provides a model for government and community collaboration in renewable distributed energy resources.”

The key recommendation outlined in the roadmaps is the need to upgrade network infrastructure and the current process is too slow to achieve this. Another key recommendation is the need for policy certainty to help grow manufacturing and training and the need for coordination at all levels of government to make sure the transition occurs in line with climate targets, with a just transition while regional communities benefit.

The Victorian Government has shown leadership in creating Regional Renewable Energy Roadmaps. In Victoria we have a clear path towards renewables, focusing on jobs, regional economic benefit and, of course, action on climate change. The recent announcement of community energy funding is welcomed. Community energy is one way rural and regional people can benefit from energy transition underway.

The Victorian Government could solidify its leadership role by legislating interim emissions targets in line with a 1.5°C trajectory. Making emissions reductions in line with the Paris Agreement would help speed up the transition, turbo charge the role of the community, create jobs and reduce power prices. The Combet Report and new modeling by Melbourne University confirms that it is both possible to have an ambitious transition to net-zero emissions while creating jobs in construction, ongoing maintenance and manufacturing. Having ambitious targets and policies are also inline with community expectations.

The Australian Wind Alliance works in each region outlined in the Roadmaps and our goal is to make sure the barriers to zero energy are overcome and that regional communities benefit. We will be adding out voice with an upcoming report Renew the Region which will compliment the Energy Roadmaps.

So far we've just touched the surface of what is found in reports and what is happening in the regions. Have a look for yourself by going here and learn how you can help in the energy revolution.