Wind farms have proved themselves for decades, both here and overseas, as a clean and safe way of generating electricity. Despite this fact, there are sections of the media and the anti-wind farm movement who continue to ventilate claims that there is something about wind turbines - the noise, the look, or, ‘I dunno, the vibe…’ - that makes them unsuitable to have around, let alone to make electricity.

The latest exhibits are some especially distorted articles in the Daily Telegraph and The Australian on a recent, fairly innocuous wind farm noise study from South Australia’s Flinders University.

This kind of discourse is lamentable for people living around wind farms as it creates the impression, without supporting evidence, that there is something dangerous going on. This only contributes to uncertainty and anxiety about wind energy - which given the continual attacks on renewables by Murdoch media, is probably their objective.

The study itself doesn’t tell us anything we don’t already know. Namely, there is a particular type of noise created when wind turbine blades pass the tower - called amplitude modulation, or AM. (Exactly the same stuff that makes your AM radio work). You can sometimes hear amplitude modulation as part of the overall turbine noise at a distance away from the turbine. It’s not particularly loud or prominent but it does exist and it’s presence is accounted for in the noise limits turbines must operate within. For example, in New South Wales, under the South Australian 2009 methodology, if there is amplitude modulation present above a certain threshold, a 5dB penalty is applied to the measured noise levels. This means overall noise needs to be lower to take into account the presence of AM, or tonality as it is referred to.

What the study has attempted to do is work out how far away from a turbine amplitude modulation can be heard, how often and at what level. As described by the researchers in the Daily Telegraph piece, this study appears to be a first step towards trying to connect historic wind farm noise complaints with AM.

But one step at a time. One thing this study did not do was make any observation at all about what the effect on residents might be, except to note that AM had been connected with annoyance in other studies.

Nevertheless, the Daily Telegraph’s hyperbolic headline, “Wind farm noise annoys residents up to 3.5 km away” somehow conjured the finding that everyone who detected amplitude modulation must be annoyed. I hope the researchers clarified this in their subsequent radio interviews.

The study did, however, thrown up some unanswered questions:

Farmers have the final say on noise

Wind farms are now a well-established part of many rural landscapes. We know, as the Australian Wind Alliance has dozens of members who live far closer to turbines than 3.5 km. In many cases, it’s well within 1 km.

Take, for example, Charlie Prell, a NSW farmer whose view from his front window, is this: 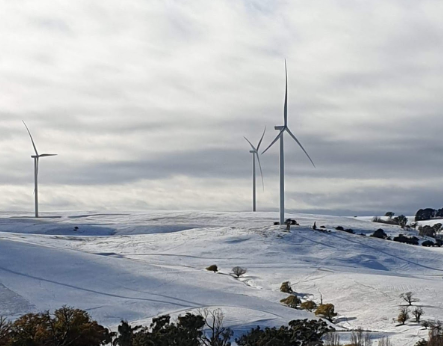 These are turbines in the Crookwell 2 wind farm, some of which are 500 metres from his home: “I constantly hear the turbines as they generate energy, sometimes from inside my house. But I also hear every car, truck and motorbike that travels along the Goulburn-Crookwell road," remarks Charlie.

Clearly, farmers like Charlie receive far higher levels of AM than most of the residents in this study. But when these farmers hear wind turbine noise, even when it includes AM, they probably don’t respond with annoyance. Quite the opposite, in fact. They’ll be reminded that the turbines are making clean electricity and contributing reliable, drought-proof finances to their farm business. It’s not being churlish to note that equitable sharing of financial benefits to residents living in and around wind farms is key to ensuring widespread community acceptance.

AWA is seeking an expert review of the foundations of the research. We hope to be able to provide a more comprehensive response then.