The Australian Wind Alliance (AWA) is a community based organisation of around 500 financial members, with an extensive online and social media following. Our members include landholders, farmers, small businesses, and members of the community, including many neighbours to existing wind farms. The Wind Alliance encourages best practice community engagement and benefit sharing as keys to maximising benefits to regional Australia and lowering Australia’s carbon emissions.

Australia is a carbon-intensive economy that has been left ill-prepared to adapt to the zero carbon world that will be required by mid-century at the latest if we are to avoid catastrophic climate change. After years of inaction on climate change, the challenge we face to rapidly restructure our economy is massive. Any climate policy instrument on the table in 2020 must start by acknowledging the size of this task and responding with the appropriate level of urgency. This must be reflected in a single-minded focus only on those solutions that will contribute the adequate level of emissions reduction in the time frame required. False solutions that see existing carbon-emitting technologies extended and avoid doing our utmost to drive adoption of carbon-reducing technologies lead us down the wrong path.

Because the roadmap fails to operate within an emissions trajectory commensurate to the challenge, it contemplates carbon-emitting technological solutions that are not up to the task at hand.

The roadmap needs to utilise existing bodies and operate alongside policy and regulatory mechanisms and legislative frameworks. Certainty around the future funding stream for ARENA is long overdue and should be settled immediately. Similarly, while universities are seen as potential deliverers of important R&D, it is not clear that the government is ready to fund this work to be conducted. The purposes of ARENA and CEFC to focus on zero-carbon energy solutions should not be diluted. Targets for energy efficiency, vehicle fuel efficiency standards and Electric Vehicles are all simple mechanisms that don’t require a roadmap to deliver the results we need.

The need to stimulate the economy after the COVID-19 pandemic presents an opportunity to turbo-charge this work.

The IEA has released a Sustainable Recovery Plan that is based on reducing emissions and creating jobs. Its goal is “to maintain and create jobs, boost economic growth, and improve energy sustainability and resilience.” Wind and solar are highlighted as technology.

“Additional solar PV and wind power could rapidly create a large number of jobs and cost effectively reduce CO2 emissions, but this will require policy support.”

Dr Fatih Birol, the IEA Executive Director said, “Governments have a once-in-a-lifetime opportunity to reboot their economies and bring a wave of new employment opportunities while accelerating the shift to a more resilient and cleaner energy future.”   The Federal Government’s Technology Investment Roadmap Discussion Paper’s goals is similar to the IEA’s Special Report on Sustainable Recovery, however, wind and solar are the technologies identified by the IEA as being a central plank of the Covid recovery not gas.

The primary challenge Australia faces is not a lack of technology but a clear sense of why technology might be implemented.

The government should set a long-term emissions reduction target of net zero climate pollution by 2050. This target should be supported by carbon budgets consistent with the Paris Agreement goal of keeping global temperature rise below 2 degrees Celsius with an ambition for 1.5 degrees Celsius. Goals for technology adoption should then derive from these carbon budgets.

With our world class wind and solar resources and abundant supply of available land, Australia has shown it is an attractive destination for investment in renewable energy. Our technical power system expertise from R&D through to project delivery, operation and optimisation is outstanding and stands us in good stead to

Decarbonizing Australia’s electricity sector should be the roadmap’s top priority given the size of its contribution to domestic emissions, its potential to support the decarbonization of other sectors, such as transport, and Australia’s world-leading levels of investment in distributed solar energy.

Wind and solar PV will be the cornerstone for this process as they have already shown themselves to be mature technologies that offer the lowest cost new generation. CSIRO has shown that currently and projected to 2050, wind and solar PV are cheaper forms of energy than coal and gas. This does not include the damaging costs of greenhouse gases or a “risk premium” for fossil fuels. Once the externality of greenhouse gas is factored in, wind and solar energy are much cheaper than fossil fuels. The Reserve Bank of Australia says coal is in decline and being replaced by renewables.

Significant coal-fired generation capacity will be retired over coming decades and is likely to be replaced mainly by distributed energy resources and large-scale renewable energy generators.. 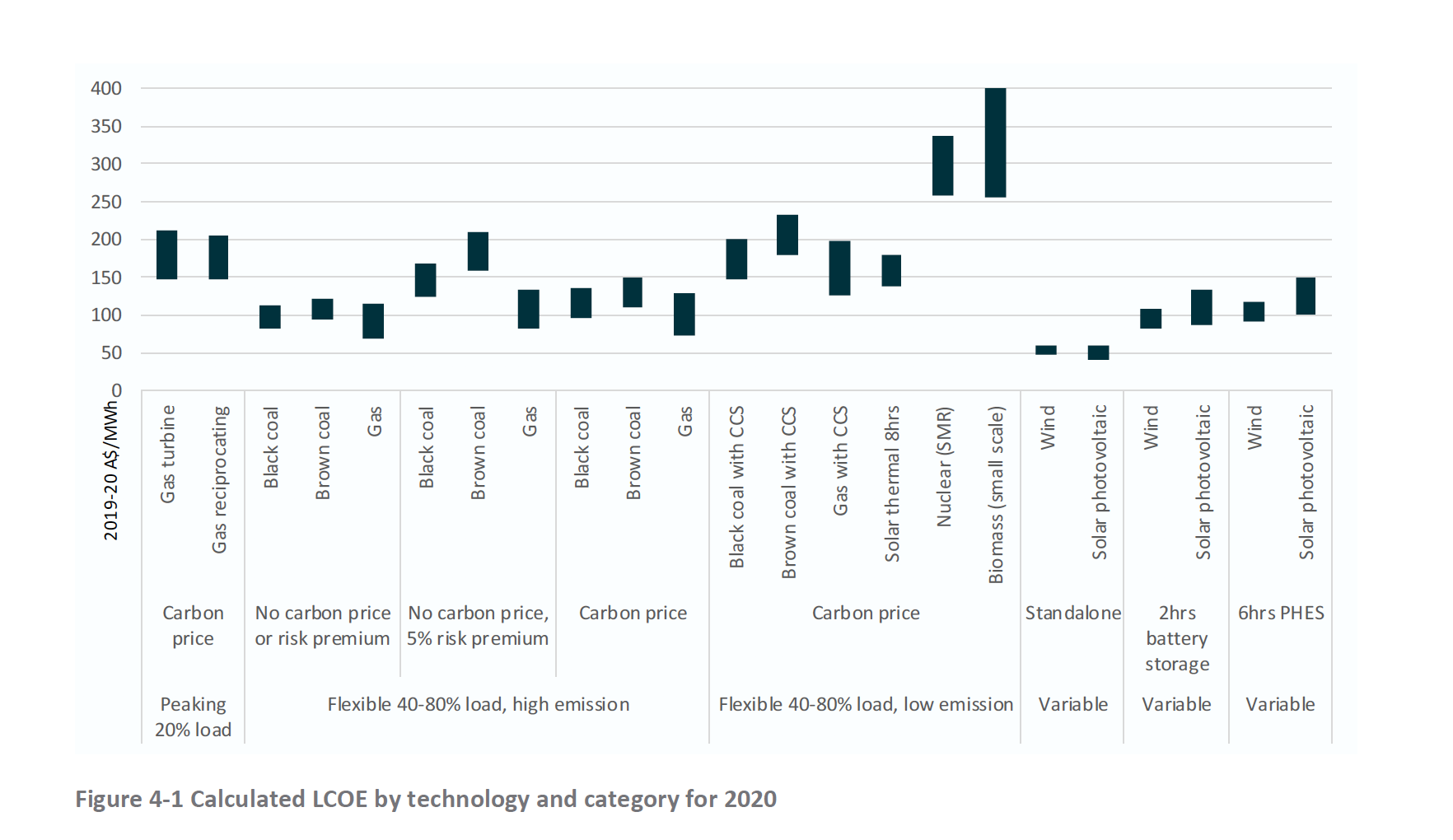 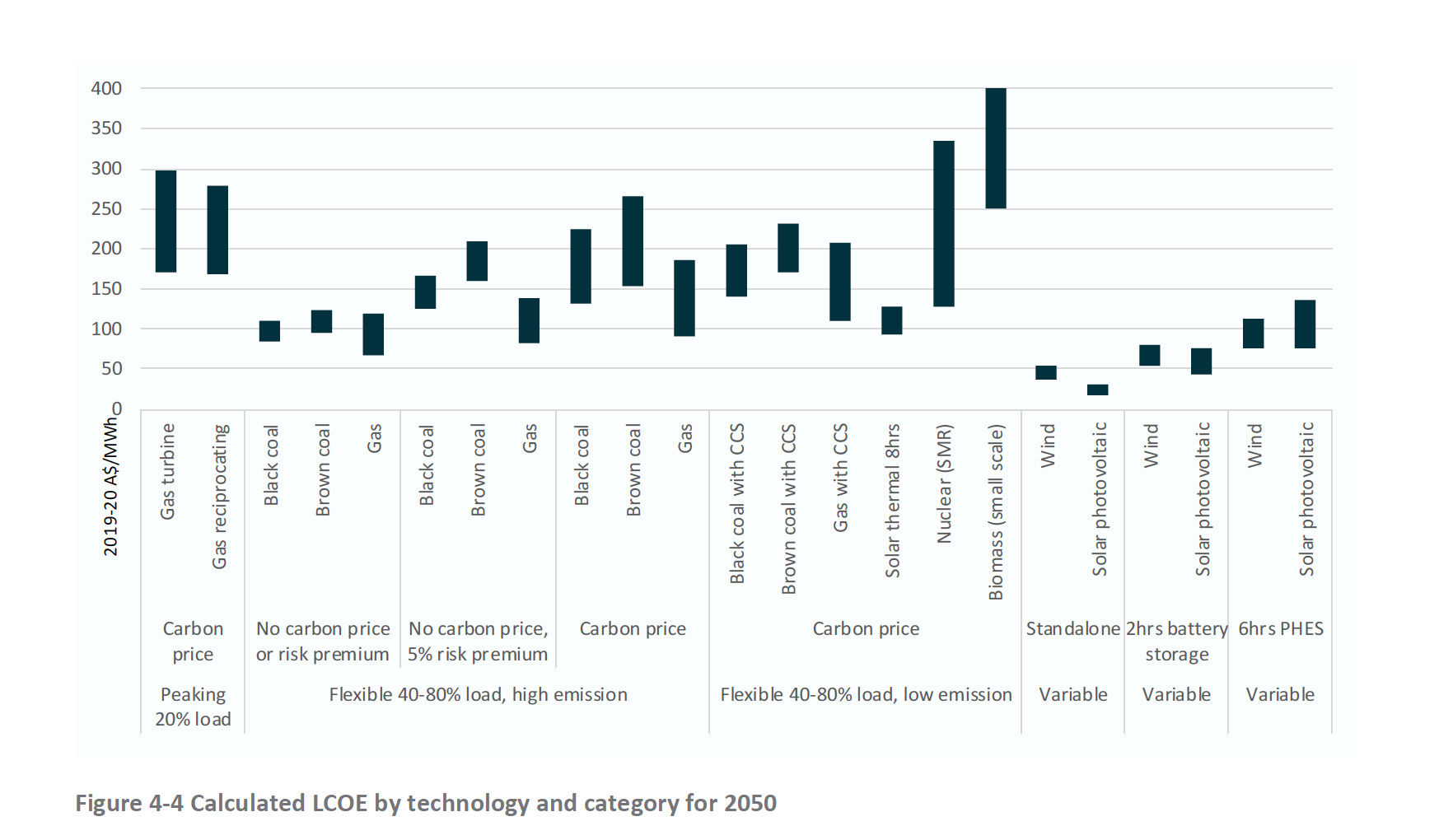 Figure 1. Comparisons of Calculated Levelized Cost of Energy by technology and category from CSIRO’s GenCost 2019-20.

Other research has shown that it is possible to move Australia to 100% renewables.  The Australian Energy Market Operator (AEMO) has mapped out how to achieve decarbonisation in line with the Paris Agreement in their step change modeling in the Integrated System Plan.

already being harnessed in European waters. Offshore wind is unable to operate in Australia as a regulatory framework still has not been established. This is a simple step the government should take to unlock significant emissions abatement in the medium term.

Fossil fuel technologies or related infrastructure that does not contribute to decarbonisation should be specifically avoided, such as ‘technologies that increase the efficiency of the existing thermal generation fleet’ and ‘gas generation to firm renewables’ (listed in Figure 1). These technologies will not reduce climate pollution, or position Australia’s economy to benefit from a net zero carbon future.

As Australia’s electricity system is still dependent for two thirds of its supply on coal-burning plants, a clear program for the closure and replacement of Australia’s coal fleet is needed to sit alongside the decarbonisation target. This program must be a ‘just transition’ program that prioritises the employment, training and social needs of regional communities as they shift from local economies based on fossil fuels to clean energy. While the details of such a plan lie beyond the scope of the roadmap, it needs to be borne in mind that new technologies bring social consequences that must be addressed.

A multiplication of large scale wind and solar plants, battery and pumped hydro plants, connected by new transmission lines throughout regional Australia will require a rethink of the level of community benefits that accrue to local communities. The Australia Wind Alliance has researched this are in our Building Stronger Communities: Wind’s growing role in Regional Australia report.

The  Energy Transition Hub, a collaborative German Australian research venture, notes the potential of an industry based on exporting green hydrogen. They found in a synthesis report that:

Rapid deployment of renewables in Australia is an essential part of a cost-efficient transition to a net-zero emissions economy. There is the potential to create an export industry based on Australia’s renewable energy resources (as much as, or even more than, doubling Australia’s domestic electricity demand).

Australia’s chief scientist and CEO of the Australian Renewable Energy Agency have both said Australia could have  700% renewable energy and export green hydrogen. The WWF has been working on the plan to make Australia a renewable energy powerhouse, mapping opportunities across Australia, in every State and Territory.