The VIC government recently invited the public to make submissions on their emissions reduction targets.

Thank you to all of you who used your voice for stronger targets, ambitious climate action, and more jobs and investment in wind energy for Victoria.

Below is the AWA's submission to the consultation process.

AWA is a community advocacy group. Our members include farmers, wind workers, local businesses and community supporters. We are independent of the wind industry. Our mission is to stand up for wind power for to build prosperous communities and lower emissions.

AWA is well connected with on-the-ground issues at many wind farm projects and is in a unique position to help find solutions.

The Australian Wind Alliance recommends that Victoria set emissions targets based on a carbon budget that provides a greater than a 50% chance of limiting warming to 1.5°C. A more ambitious target would translate to less emissions, more jobs and lower power prices according to the Independent Expert Panel: Interim Emissions Reduction Targets for Victoria (2021-2030) Final Report (Combet Report).

Opportunities for Victoria from Strong Targets

The Combet Report looks at opportunities to decarbonise Victoria in line with the Paris Agreement of limiting warming to “well below 2°C” and “pursuing efforts to limit the temperature increase to 1.5°C”. The report describes the serious consequences for the state if global heating is not held to this 1.5°C limit, as well as the importance of playing our part in tackling global heating. Australia is one of the highest per-capita emitters in the developed world. Amongst Australian states, Victoria has the highest-emitting electricity sector. The only thing stopping us moving on the road to zero emissions has been politics. We’ve got the technology, we’ve got the public support all we need is to get on with the job. The Combet Report shows it can be done.

The expert panel found that early action on climate change is cheaper than waiting and there are many opportunities in Victoria to keep the state in line with the Paris Climate Agreement. In addition, it found that wholesale electricity prices will fall with the increase in renewable energy.

The report notes that renewable energy can play the biggest role in reducing emissions and that wholesale prices will be cheaper in the future if we move away from fossil fuels:

Recent research published in Energy Policy confirms the reduction in power prices with more wind energy generation, concluding in Australia that “each extra gigawatt of wind capacity decreases the wholesale electricity price by 11 AUD/MWh”. Another report from SGS Economics and Planning notes that decarbonising our economy “would save the Australian economy $549 billion over the next decade while at the same time providing a number of social and environmental benefits”.

A key finding of Combet Report is the central role renewables, especially wind energy, will play in reaching zero emissions.

Victoria’s emissions by sector in 2016

Solar and wind are already the cheapest forms of new energy generation even when additional costs are included for energy storage (p 69). 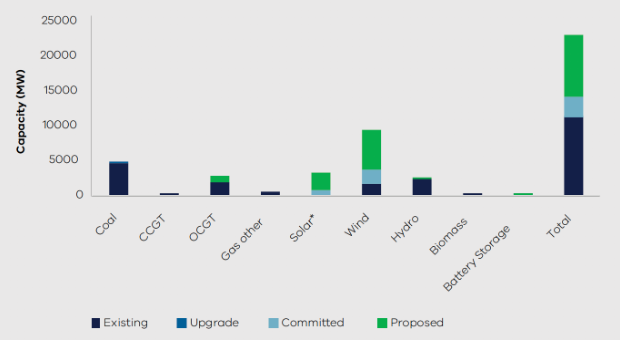 The Combet Report sets a new benchmark in what is possible, however, we find that the recommendations fall short. The Australian Wind Alliance is calling for Victoria to adopt targets based on 1.5°C emissions budget which the Combet Report shows is achievable for Victoria.

The report notes that an interim target of 43% below 2005 levels by 2025 and 67% for 2030 would be inline  for 1.5°C carbon budget which is based on a 50% chance of limiting warming to 1.5°C. A 50% chance is too much of a gamble. A more ambitious target is required to meet the challenge of a fair emissions budget that will leave a safe climate.

Norway and Uruguay will be zero emissions by 2030 and Finland will be at zero emissions by 2035. This is the type of ambition that we need to stay within a 1.5°C carbon budget for Victoria. The upcoming UN 2019 Climate Summit's theme is ‘A Race We Can Win. A Race We Must Win’ we have little time to act and now is the time to be bold.

Having 1.5°C emissions target would make sure that a safe climate is more likely reached while the emissions reductions are more inline with the Paris Agreement which is “well below” 2°C and pursue efforts of limiting warming to 1.5°C. Making these targets would also be inline with the commitments that Victorian Government has taken the Paris Pledge for Action and signed the Climate Leadership Declaration for limiting warming to 1.5°C.