Just four and a half hours later, however, with strong winds pummelling south eastern Australia, that record was (ahem) blown away, as the nation’s fleet of wind turbines pumped out 4,789 MW, a full 200MW above the previous record.

Wind generation records being set and then smashed just a few weeks later is a pattern we will see more often as the number of turbines installed around the country grows rapidly.

It took Australia 30 years to build our current fleet of 87 wind farms, from tiny, local plants like the 2 turbine, 450 kilowatt wind farm on Thursday Island to the massive 140 turbine plant at Macarthur on grazing land in South Western Victoria. Together, these wind farms comprise 2,711 turbines providing 6,278 MW in capacity, or around 10% of Australia’s total capacity.

This will almost double in the next 2 - 3 years as a further 26 wind farms are built, with 1,745 turbines providing an additional 5,930 MW and bringing Australia’s total wind capacity to an impressive 12,208 MW.

Given that wind’s share of total east coast demand was 7.8% over the last 12 months, we can reasonably expect that wind will account for around 15% by the end of 2022.

This is great news for regional Australia where thousands of wind farm construction jobs are pumping millions of dollars into local economies and, by our estimates, paying $60 million to farmers and community funds every year.

Wind overtaking brown coal is only a matter of time

It’s also great news for the climate as wind, together with rooftop and large-scale solar, drives the transition towards clean energy and away from polluting coal.

It’s long been the case that the Latrobe Valley’s big-polluting brown coal plants were the second largest generation source on Australia’s east coast, after the black coal fleet in Queensland and NSW. But that’s about to change as wind steps up to take its place.

Fifteen years ago, brown coal supplied 25 - 30% of our demand. Today, after the closure of Hazelwood, the dirtiest of the Valley’s plants, and more regular breakdowns take older units offline at the other plants, that share is down around 15%.

When the wind is really blowing now, there’s more wind power in the mix than all remaining brown-coal burning plants put together. This 3 day period in this diagram, from Friday 6th - Monday 9th September, is one of those periods. A similar 3 day period occurred from 8 - 11 August. 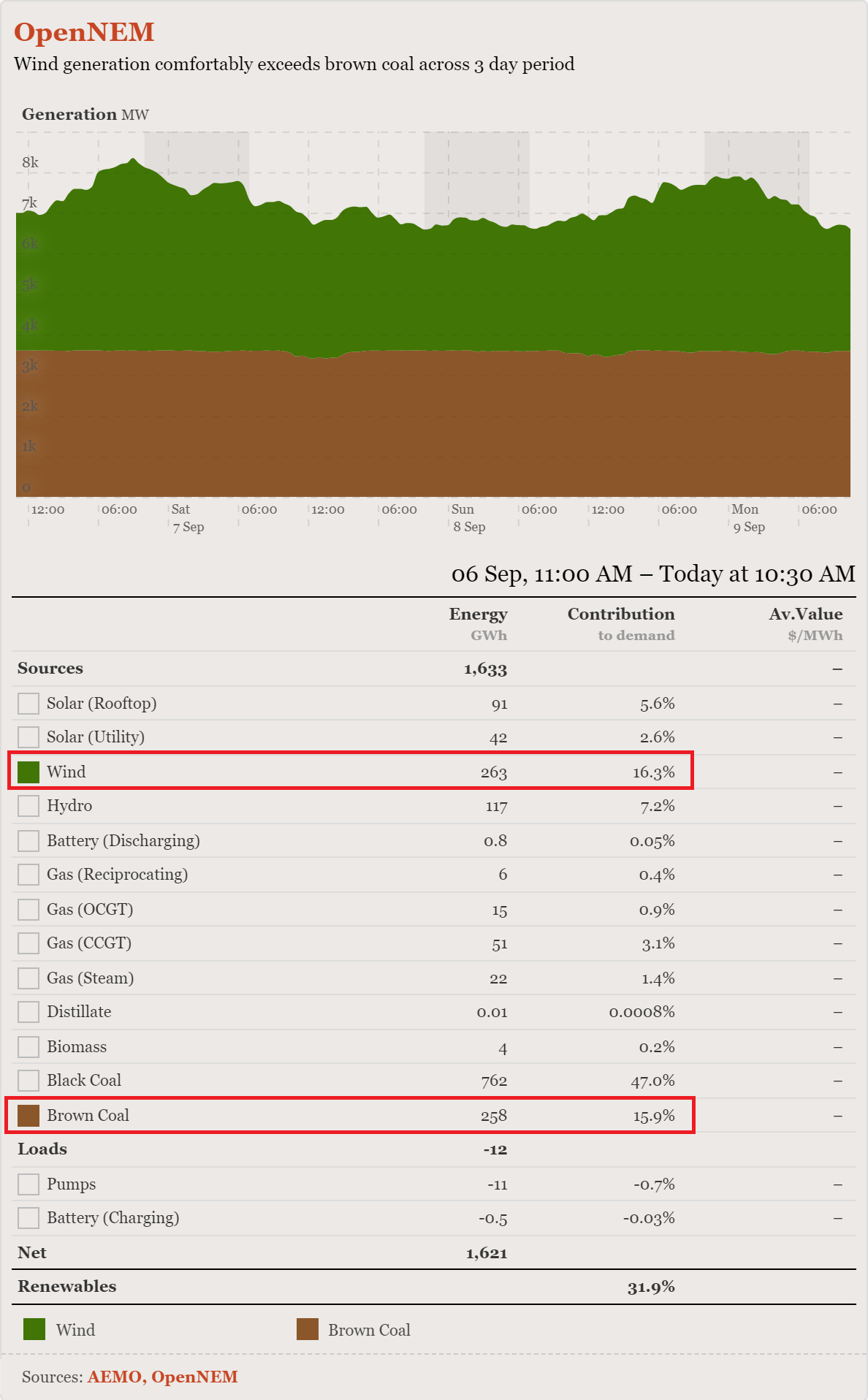 Hitting this level of generation required winds powerful enough to sustain an unusually strong 65% capacity factor across the country’s wind farms over a 72 hour period. While a high-wind event like this is not unheard of, it’s more likely to occur in the middle of a late winter or early spring blast and not that often during the rest of the year.

But as the number of wind turbines across the country increases, reaching this amount of wind generation will require less and less wind, to the point where it will happen reasonably often.

With wind energy growing rapidly and brown coal on a decline, this dynamic is only heading in one direction. Once the current pipeline of committed wind projects is complete, there’s a strong chance that total wind farm output will exceed total brown coal output across the year. If it’s not by 2022, it won’t be much later.

When it arrives, this will be a fundamental change on the league ladder of Australia’s energy landscape. A well-loved team, with its glory days well behind it, will be relegated behind a newcomer with a strong game that is clearly here to stay. With solar also growing rapidly, the descent down the ladder will have only just begun.

It’s a sure thing that the elevation of an energy source that is variable in its output and does no damage to the climate will outrage the fans of so-called ‘baseload’ power. To which the reply will just have to be, “Scoreboard!!!”