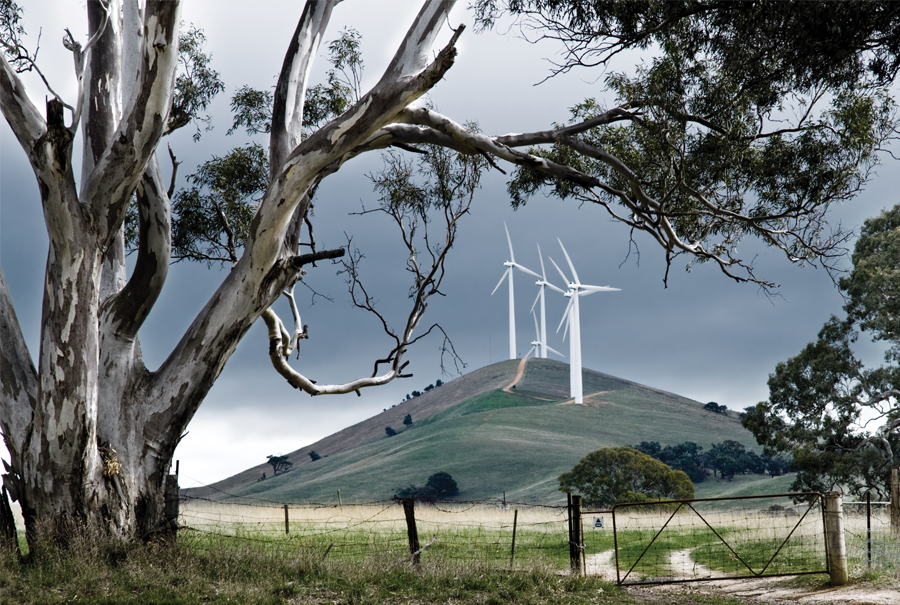 Article originally appeared in the September issue of Energy Magazine

Despite Federal Policy inertia when it comes to wind and other renewables, the Australian wind energy industry is moving ahead in leaps and bounds. Here, we take a look at how the industry has performed in recent years, and how it may fare in the years ahead.

In 2013, Victoria’s Macarthur Wind Farm became the largest wind farm in the Southern Hemisphere. Next year that honour will pass to the newly commissioned 453 megawatt (MW) Coopers Gap wind farm in Queensland.

The differences between the two projects tell an uplifting story of how quickly Australia’s wind sector is developing. Coopers Gap will cost 20 per cent less to build than Macarthur and yet will deliver 50 per cent more electricity – enough to power 264,000 homes1.

Wind’s dramatic performance improvements have helped fuel a construction boom that saw wind generation reach 4020 gigawatt hours (GWh) in the second quarter of 20192, an annual growth rate of 28 per cent. As this trend continues, we can expect a windfall of tumbling electricity prices in the coming years.

Indeed, the good times for wind are just getting started.

According to modelling firm Reputex, wind is about to blow past both gas and brown coal, stepping up to the podium to become Australia’s second-largest source of electricity by 20224 (as shown in Figure 1).

Wholesale power prices are projected to take a dive due to this influx of cheap, renewable energy, with brown and black coal being increasingly pushed out of the market.5

Despite this positive outlook, the road ahead for wind energy is not clear cut. Here are some of the most notable trends, drivers, opportunities and barriers for wind in the next few years.

The Federal Government, newly re-elected in May, still lacks a credible emissions reduction policy5. Many in the industry, along with state governments, are calling for coherent direction from Canberra.

Despite the absence of new policy, the Federal Government has set its sights on reducing power prices – setting a target price of $70 per megawatt hour (MWh) for wholesale electricity by 2021-20226.

Projections show we are on track for lower power prices, but the new Federal Government is not to thank5.

The current buildout of wind and solar farms is the final tranche of projects driven by the federal 2020 Renewable Energy Target (RET). Added to this, state-level RETs in Queensland and Victoria are enabling further new projects, with Victoria making strong progress.

These large-scale renewable projects, together with a dramatic uptake of rooftop solar over the next 18 months, are expected to drive down wholesale electricity prices.

And it’s not just Queenslanders and Victorians pushing for more renewable energy.

His dream? For South Australia to produce more electricity than needed for its own consumption, and to sell excess electricity interstate through a proposed state interconnector to NSW.

If this interconnector proceeds it will pave the way for large-scale wind and solar projects to be built on pastoral land in the north-east of South Australia, adjacent to this new transmission.

Planning the unstoppable transition to renewables

The South Australia-NSW interconnector is just the first of a number of major transmission upgrades the Australian Energy Market Operator (AEMO) is actively planning.

Through its 2019-20 Integrated System Plan (ISP), AEMO is building the framework for a 20 year transition process of our electricity system ageing coal-burning plants to renewable energy backed by storage.

The ISP could be the game changer in a country of heated climate politics, outlining the steps for how governments could build a modern energy grid, filled with renewable energy.

The next version of the ISP is due at the end of this year and will model different speeds of transitioning electricity systems.

Excitingly, it will include a fast-transition “step change” model investigating what a shift in government policy to more rapid emissions reduction and rapid uptake in renewables would look like. Existing modelling done for AEMO suggests that coordinated and planned infrastructure investment could provide $3.8 billion in savings to consumers8.

A transition is coming, and this is good news for workers and communities who are reaping the benefits of a booming wind industry. At the end of 2018, there were 5000 direct jobs in wind energy and a total of $8 billion of investment flowing into these projects and their communities9.

Some wind projects are even helping to grow new industries through power purchase agreements (PPAs).

Take the Bulgana Green Power Hub – a $350 million wind farm plus Tesla battery setup, which is going to power the largest greenhouse in Australia – the Nectar Farms expansion in western Victoria.

This is a world first for the horticulture industry and will bring 420 jobs to the north-west of Victoria, as well as clean, cheap wind energy for the Nectar Farm and the rest of the state10.

Corporates are also starting to write their own PPAs with generators, turning to renewables to stabilise their rising power bills.

Since 2016, businesses like Telstra and the Commonwealth Bank and organisations like the University of NSW have been snapping up a whopping 3600MW of renewable energy. Of these, 42 per cent are wind farms and a further 8% a mix of wind and solar11.

The new Business Renewable Centre Australia members portal, launched in March this year, is designed to link up businesses with renewables projects to organise PPAs12. Based on an American model, the portal already has over 200 members with 13,000+MW of renewables on offer13.

In the medium term, certainty in federal energy policy will be needed to sustain investment and continue the downward trajectory of wholesale electricity prices14, as well as to properly play our part in solving the climate crisis.

But for the next few years, it’s going to be a breeze for wind and the consumers who will enjoy cheaper power prices.

2More power from renewables than brown coal for the first time ever, Australian Financial Review, 3 July 2019

3Renewable energy is growing, but NSW and Queensland are still undershooting their targets, ABC, 10 July 2019

4Where to for wholesale electricity prices under ‘current policy’?, RepuTex Energy, 29 May 2019

6Coalition to pledge ‘price target’ to cut household power bills, The Australian, 10 May 2019

7Australia’s energy future: the real power is not where you’d think, The Guardian, 22 June 2019