AWA’s NSW regional coordinator, Charlie Prell, attended the launch of the new Gullen Solar Farm at Bannaby, just south of Crookwell in the Southern Tablelands of NSW.  The project is co-located with the Gullen Range Wind Farm, and gives us a glimpse of the potential benefits that co-location of renewable energy projects can deliver. If we embrace the benefits and possibilities of renewable energy co-location regional Australia could have a very bright future ahead.

The solar farm is Australia’s first large scale solar farm co-located with a grid-connected wind farm. It is integrated with the Gullen Range Wind Farm which has an installed capacity of 165mW coming from 73 Goldwind turbines.

More than 100 people attended the launch, with 3 speakers sharing their views on why this renewable energy project will kick start a new wave of integrated co-generation infrastructure.

Ms Hongbo Wang, Economic and Commercial Councillor of the Consulate General of China, spoke of BJCE’s commitment to use the co-generation model to role out up to 1GW of renewable energy projects in the near future.

Weiwei Shi, General Manager of BJCE Australia, spoke of the compatibility of wind and solar generation. The turbines tend to be at maximum generation during the evening, while the solar panels are at their most effective during the day. This project has shown that there are massive economic and environmental benefits if wind turbines and solar panels use the same infrastructure to connect to the national grid.

John Titchen, CEO of Goldwind Australia, spoke of the lessons learned on this innovative pilot project and the changes the company has made to its development model for future projects. He also said the company will explore the option of installing batteries to add flexibility and reliability to it’s already impressive CV.

We had the opportunity to tour the project, which is already generating clean energy. As we walked through the panels, we learned that the grass under the 42,000 panels will be eaten by sheep. Lawnmowers won’t be needed here!

On a hot summer day the amount of green grass growing in the shade of the solar panels was eye opening! 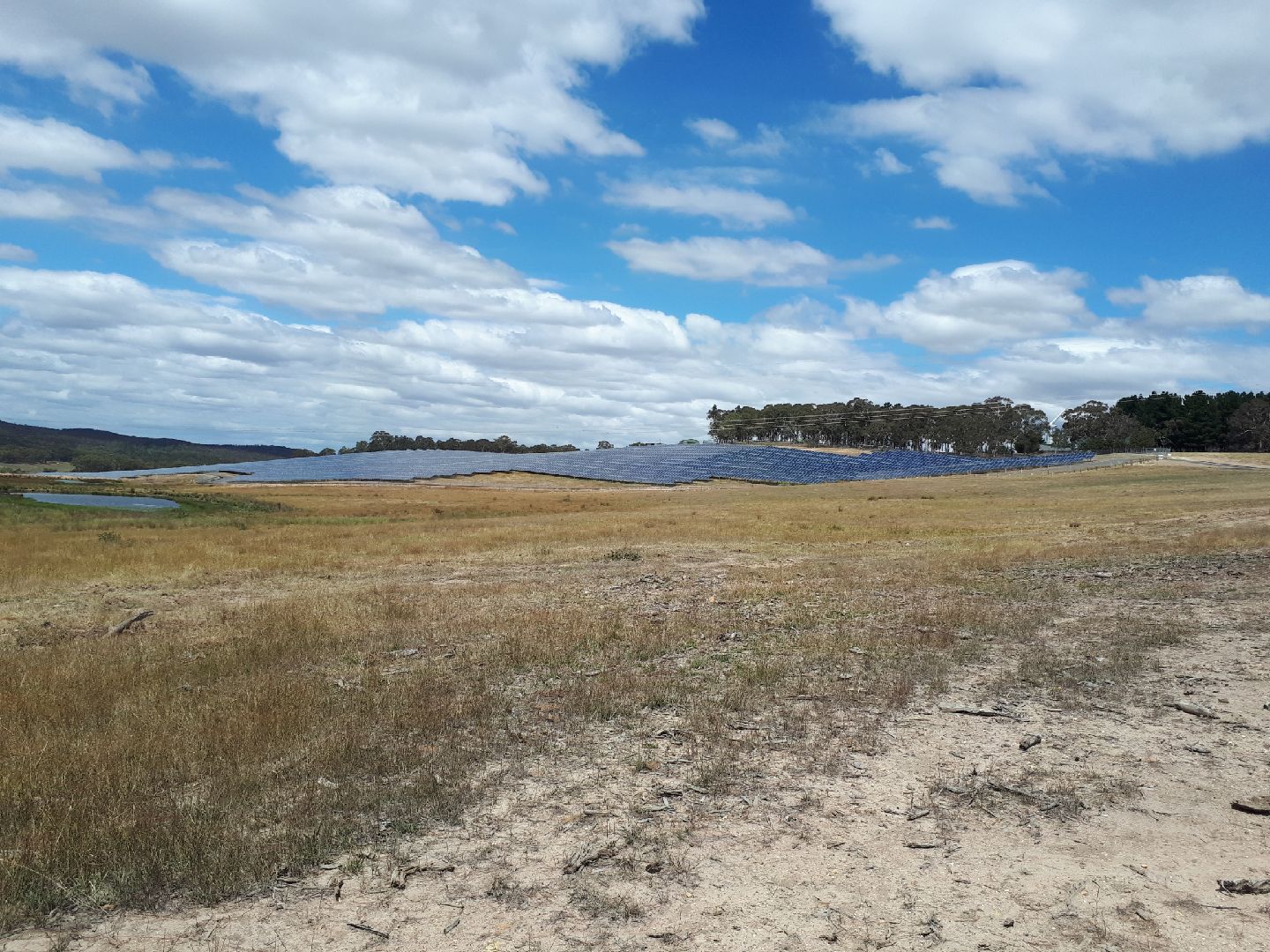 With the addition of a battery installation, this could become the first renewable energy hub in the Southern Tablelands of NSW.

Russell Erwin, chair of the Bannister Community Hall, said that the changes have been confronting, but the local community has accepted the change and will work with BJCE to get the best outcome possible for the whole community.

The owners of the wind and solar farms run information tours of the facility every two months. It is part of the “Renewable Energy Trail”, an initiative of the SERREE network. Most tours are booked out well in advance! There are also regular, educational tours for local school students of any age.

The whole community is making this exciting journey into the future together.

The owners of White Rock Wind Farm and Sapphire Wind Farm in the New England region, both due for completion this year, are now also co-locating solar farms with the wind farms. The Sapphire Solar Farm could add an additional installed capacity of up to 170MW to the grid. The White Rock Solar Farm adds 20MW to the 175 MW Wind Farm. Stage 2 of the wind farm will add another 202 MW of generation capacity. That’s a total generation of nearly 400 MW capacity!

What an inspiring glimpse of the potential future of electricity generation in Australia!

The next tour of Gullen Range Wind and Solar Farm will be on March 20th. These tours are very popular, so book early! For more information visit the web site here.