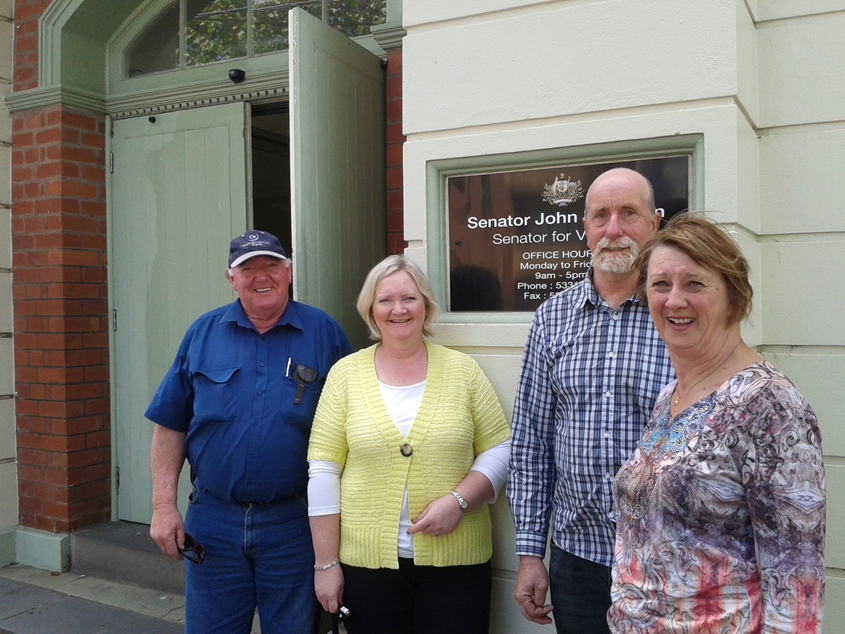 The fight to get back Waubra's name moved into the offices of local politicians when a group of Waubra community leaders met with Senator John Madigan in Ballarat to ask him to back their call.

Ken, Kerryn, Doug, Margaret (L-R) and Karen (not pictured) told the Senator about the passion they felt for their local community, the positive presence of the wind farm in their community and the harm that was being done by the foundation who've usurped their name.

Given the Senator's reputation for pursuing wind farms, this was a brave performance indeed from the group.

They were given a good hearing by Madigan and succeeded in convincing him to write to the foundation's directors and pass on their concerns.

Let's hope it counts for something and that the foundation acknowledges that the decent thing to do is to leave this town alone to carry on with their lives.

Our media release is below.

Senator John Madigan today met with representatives of the Waubra community and heard the passion behind their call to retrieve their town’s name from the campaign organisation, “Waubra Foundation”.

Senator Madigan received a copy of the 300-voice petition from the Waubra community asking for their name back and agreed to pass on their concerns to the foundation’s directors.

“We are pleased that the Senator listened to our plea and understood how strongly we feel about Waubra’s good name,” said Waubra resident, Kerryn Gallagher.

“We are passionate about our town and it hurts when this group drags our name through the mud.

“We’re very grateful to Senator Madigan for agreeing to pass on our concerns.

“Wind farm sound is just a part of our landscape now. It’s not excessive and it doesn’t bother us,” said Ms Gallagher, who lives with 39 turbines within 3km of her house.

“I hope Senator Madigan will accept my invitation to visit my place and find out for himself what it’s like to live among the turbines.

“Senator Madigan is in a unique position to let the directors of the Waubra Foundation know what’s it’s actually like here in Waubra and we hope he has a clearer picture after today’s meeting.

A number of issues were raised in a lengthy discussion, including the ongoing issue of official compliance of the Waubra Wind Farm.

“While we acknowledge that compliance hasn’t been finalised we don’t see this as a barrier for the foundation to drop our name right now,” said Waubra farmer, Doug Hobson.

“The truth of the situation is that the vast majority of the Waubra community are living happily with the wind farm.

“We’ll continue to put the case to the foundation that the decent thing to do is to allow Waubra to have our name back,” concluded Mr Hobson.