There’s been some excellent community projects rolled out around the rocky paddocks at Dundonnell to the muddy farms at Mortlake South. The Victorian Renewable Energy Target has led to some of the world's best community benefit and engagement programs. Along with community benefits the VRET has helped grow a local renewable energy manufacturing industry at Portland and also in the old Ford Factory in Geelong where a hightech turbine assembly plant has been established. Ballarat is becoming the centre of education, for the renewable boom, with the creation of the Asia Pacific Renewable Energy Training Centre at Federation University it is also home to Direct Wind Services (below) amongst other companies. 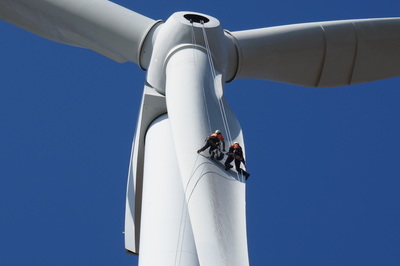 We highlighted  the need for a new VRET with Environment Victoria, Wind Alliance and Friends of the Earth, to build on the success of the first VRET. A new round of auctions with a new high bar set by the Vic Gov for auction winners would deliver to their communities. Civil society called for climate action to be at the centre of a recovery see the report ‘Putting jobs-rich climate solutions at the centre of Victoria’s economic recovery from COVID-19.’ The job potential of large scale renewable was highlighted in the Climate Council’s Clean Jobs Plan. A renewable based recovery also helps meet the United Nations Sustainable Development Goals of Climate Action; Sustainable Cities and Communities; Affordable and Clean Energy.

The recent announcement that the Victorian government will go out to the market for another 600 megawatts of renewable energy is a promising indication the government will act on this call.

Renewables will be at the heart of our Covid recovery.

Our government will be going 100% renewable. We’ll be tendering for more than 600mw of new build renewables to power our schools, trains, hospitals and other govt services. 1/2 pic.twitter.com/oVNVMpOuHj

The renewable energy sector has been an engine creating jobs in regional areas like Western Victoria. New wind and solar farms are employing hundreds of locals in well paying, skilled ongoing jobs in operations and maintenance. Wind and solar farms benefit local communities in different ways. They pay rates to cash strapped councils that go into essential services like road building. Payments to neighbors and landholders, manufacturing industries and also community benefit/investment programs. The design of the VRET program means that it is expected to result in net revenue to the Victorian Government.

Three wind farms were supported by the VRET. We’ve looked at Berrybank Wind Farm before so I wanted to highlight some developments at the Dundonnell and Mortlake South Wind Farms, look at local manufacturing and then cast forward to proposed projects like the Golden Plains Wind Farm. I’ll just say that Berrybank wind farm enjoys widespread community support, in part because they engaged the community early and community leaders helped shape the community benefit program which was in part a one-off grant of $3 million for community projects in the Corangamite and Golden Plains Shires as well as a Community Solar Program - the community was brought along with the process. Recently Jimmy Buscombe of the viral wombat video fame finished off a Brolga mural at Lismore Water Tower funded by Berrybank wind farm.

Progression of the painting by Jimmi Buscombe funded by Berrybank wind farm. 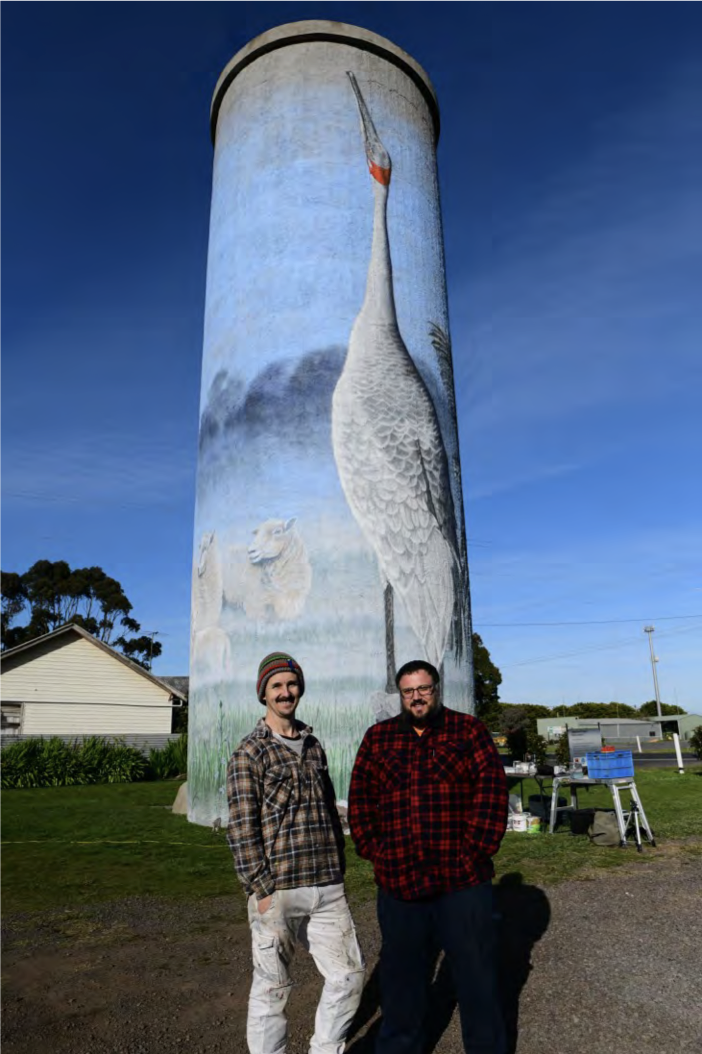 Warrnambool artist, Jimmi Buscombe, who rose to fame when a video about his "Gutsy the Wombat” with Nathan from Berry Bank Wind Farm (Courtesy of GPG).

“Dundonell has a population of 46. There’s more sheep here than people,” farmer and host landholder, Will Lynch said at the opening of Dundonnell Wind farm. He’s been a driver of the wind farm with a group of local farmers. After consulting the community and looking at needs, Tilt developed a benefit sharing/investment package that included a community fund to fund training, social and environmental programs. One of the social programs is a project with Women's Housing and Warrnambool-based Emma House to guarantee funding of more spaces of crisis housing for women and children in the south west region.

By entering into an agreement to share its transmission line with a nearby wind farm under development, Mt Fyans Wind Farm, Tilt looked to lower the impacts on the community and respond to community concerns over the line to its Salt Creek Wind Farm by building trust with the community.

For their efforts Tilt recently won the Clean Energy Council Community Engagement Award for the benefit sharing programs rolled out as part of the Dundonnell Wind Farm.

Acciona’s Mortlake South has made an innovative neighborhood benefit program that also supports local businesses. Acciona’s community engagement team developed a Neighbourhood Benefits Card for anyone living near the wind farm that can be used in participating local businesses in Mortlake, Noorat and Terang. The program is funded up to  $180,000 a year. This program has only just been rolled out and there’s 40 participating businesses involved so far.

Acciona recently made a video highlighting how they are supporting local jobs, worth a look

Another constructive program is funding going to Deakin University to produce a virtual reality headset. The system will let users see and hear what the proposed wind farm will look and sound like. Associate Professor Ben Horan said it will go further than that, “For instance, they will be able to see the technology within the wind turbines and look up the amount of energy the turbines produce in given wind conditions.”

The projects have helped kick off local manufacturing. All three wind farms have drawn on local skills in Victoria with Keppel Prince Engineering, based at Portland, that makes wind towers. Keppel Prince CEO Steve Garner said in the past that without the VRET his business would be “non-existent.”

“The reason I say that is because the VRET has local content rules and that drives work for us. Without that everyone imports the work from overseas. We can’t compete with that, which would lead to the loss of 150 jobs at our facility.”

Vestas, the turbine supplier for both Dundonnell and Berrybank, demonstrated its commitment to local manufacturing and content by establishing a Renewable Energy Hub at the former Ford Motor factory in Geelong, Victoria, to locally build and test hubs for all of the turbines installed across the two projects. 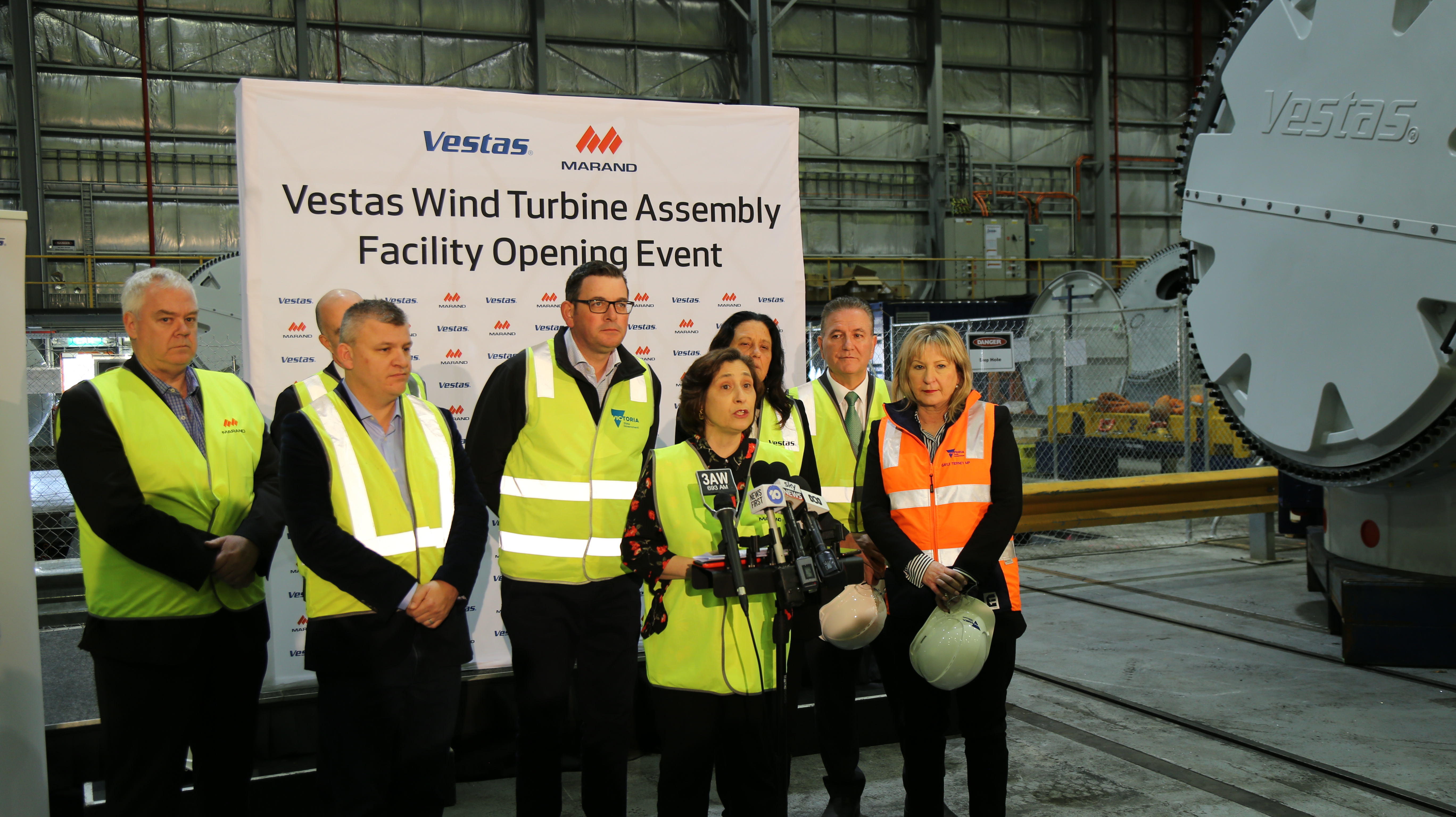 Another healthy industry is the maintenance sector. For example Ballarat based Direct Wind Services who spoke at the launch of our report last year Building Stronger Communities with wind energy.

The high bar set by VRET guidelines has had an effect beyond the VRET projects such as the proposed Delburn, Hexham and Kentbruck Wind Farms which we’ve written about before.

The Golden Plains Wind Farm is offering a community benefit program which includes free energy to homes within 3km of the wind farm including the township of Rokewood, with a free home energy audit. West Wind, who is developing the project, has also outlined an option for co-investment in the Wind Farm itself by the surrounding community.

The wind farm would employ 700 workers in the construction phase that lasts years. When finished it will provide the “equivalent annual power output of one-third of the recently closed Hazelwood coal fired power generator.”

The Australian Wind Alliance was an early advocate for measures that benefit the community such as neighborhood payments that have now evolved to innovative community benefit programs. There is now a better understanding of community impacts and a movement to make sure Wind Farms deliver cumulative benefits for communities and leave them better off. We explored these themes in a panel discussion in Ballarat in 2019 which included Taryn Lane and David Clarke, a write up can be found here. The next step in community benefits is thinking about how communities can be involved through community co-ownership, co-investment and community ownership. Themes which we explore in our report Building Stronger Communities. Another element is how projects interact together so communities can get the best outcomes. As renewable projects and their associated assets are gathered in Renewable Energy Zones we see a need for greater coordination between previously discrete projects. The Australian Wind Alliance has worked extensively with wind farm communities and is regionally based so we’re keen to make sure this is done right.