Last week, with the support of the Renewable Energy Alliance, I attended the Tasmanian Energy Development Conference in Devonport. I attended as a community representative, and took part in a panel relating to community engagement in renewable energy development.

I live in the near centre of Tasmania, a town called Miena, on the south end of Great Lake. I sit on the panel for the allocation of money from the Cattle Hill community fund. I’m a keen advocate for renewable energy. We are all experiencing the long predicted climate change disaster. The six week long bushfire emergency in 2019 up here in the Highlands is clear evidence of that change.

The Tasmanian Central Highlands is one of the 3 Renewable Energy Zones (REZs) identified in Tasmania. The existing high voltage lines around the old Waddamana Power Station enabled the establishment of the Cattle Hill Wind Farm, now in its second year of operation.

While I think of it, what do wind turbines think of renewable energy? – They’re big fans! 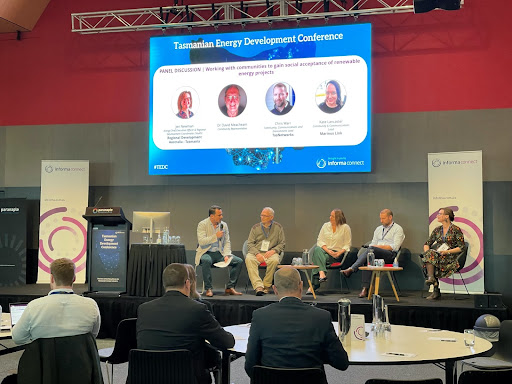 While the scene promised a future of climate friendly energy development, there were also plenty of reasons to be either anxious or sceptical about the path ahead.

Firstly, the early retirement of so many coal-fired power stations suggests that without urgent buildout of new renewable energy generation, we are likely to see even more energy delivery crises such as experienced on the eastern seaboard in June this year.

Secondly, an awful lot of the Tasmanian development is dependent upon funding for the Marinus cable link between Burnie and Victoria. The Australian Energy Market Operator (AEMO) has identified the certainty of this development as being central to Australia’s future energy security. While planning for the link is well advanced, the funding arrangements seem to be embryonic.

Thirdly, while there is a new Tasmanian government department responsible for coordinating renewable energy development and infrastructure, termed Renewables, Climate and Future Industries Tasmania (RECFIT), its budget is a mere $800,000 per year. When you consider that they are supposedly responsible for driving the huge infrastructure development (in particular, high voltage transmission) and corralling a host of cautious private sector developers, the department seems to be seriously under-resourced.

Finally, and I think most seriously, all of the projected developments are forecast to require a workforce of about 7600 positions. Most of these are trade qualified positions. Again, a new Tasmanian government body has been established to supposedly enable the development of this workforce. That department, the Tasmanian Energy and Infrastructure Workforce Advisory Committee (TEIWAC) is offering 2500 fully funded trainee places, enabling 120 different qualifications. To date, only 1300 of those trainee places have been taken up, with another 100 in the pipeline. I suspect that again we are going to see a massive reliance on FIFO staff during the construction phase, in particular. The promise of good quality jobs for locals seems a bit far-fetched. The Tasmanian government promises to establish an energy market jobs portal, supposedly to be in place by the end of 2022. When you consider that a number of the infrastructure and RE developments are due to kick in by or before 2024, and many of the trainee programs involve more than a year of study, the workforce development effort by the Tasmanian government seems underpowered. The portal development is a good example: to establish a basic portal shouldn’t take more than a couple of weeks of effort, not six months.

One last thought: What do you call it when an electron cheats? - A Current Affair!